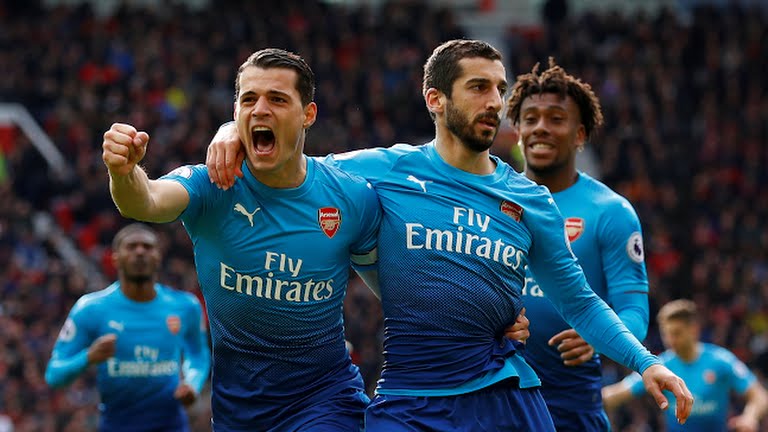 The gunners played against Manchester United today and they have lost 2-1 after a late goal from the red devils.

Arsenal came into this Match well knowing that they had fewer chances of winning because the manager had left some of the players in London to rest them because he valued the Atletico Madrid match than this one.

The gunners were outplayed by the home side in the first half of the match with them scoring in the 15th minute through Paul Pogba who put the ball into the back of the net and Arsenal failed to make a response in the remaining 30 minutes of the first half. The Arsenal team looked more lively in the 2nd half as they now finally begun making clear-cut chances and found an equaliser through Mkhitaryan to make it 1-1 in just 5 minutes after the start of the 2nd half.

As the match reached the 90’s, it looked like the match was going to end in a draw but the gunners were stunned to see the red devils get a late goal through their midfielder Fellaini making it a 2-1 win for the homeside.

– Arsenal were outplayed by the visitors in the first half of the match.

– The gunners could have won the match if they came with a full squad.

– Alexis Sanchez has faced the gunners for the first time since leaving the North Londoners in January.

– Alexis Sanchez wasn’t that impressive today against his former club.

– Arsene Wenger will be disappointed that his squad didn’t hold on for a few more minutes to make it a draw.

Most Arsenal supporters were praying that the gunners win against the red devils today at the Old Trafford so that Arsene Wenger can step down as Arsenal manager with a win from his arch rival, Jose Mourinho but un fortunately for them, it wasn’t possible because Jose Mourinho’s men proved to be better today.

Arsenal Gets Eliminated From The Europa League By Atletico Madrid