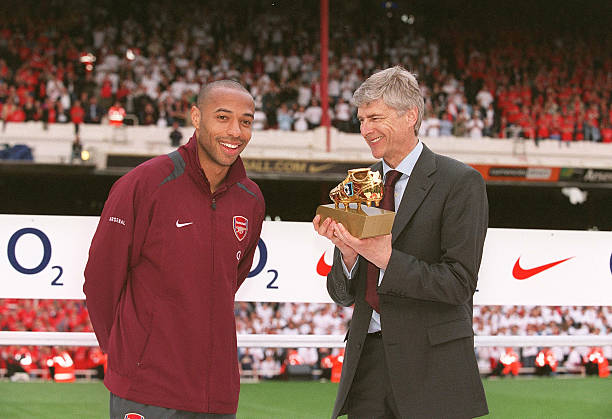 Arsene Wenger was honoured for the services he has provided to the Arsenal team in the past 22 years and he was given a special gift in his last match at the Emirates Stadium yesterday when they took on Burnley.

It was an emotional day for the manager because he was saying good-bye to a place where he has gone to almost every week in his life, most former Arsenal stars like Robert Pires, Martin Keown and Freddie Ljungberg all attended the match paying their tributes to a man who was once their manager.

But among all those many Arsenal Legends, the gunners have, Thiery Henry is the most respected for the contribution he made for the North Londoners under the management of Arsene Wenger so many expected him to also be present on such an important day for the French man who signed him to bringing him to Arsenal but he wasn’t available because he was covering the Manchester City’s title victory for Sky Sports.

Former Sky Sports commentator Andy Gray believes what Henry did was being disrespectful to the departing Arsenal manager.

“I am staggered, he’s not there. I was under the impression that every Arsenal player who played 100 games for Arsene Wenger would be at Arsenal pay their respects and say cheerio to the great man. ” Gray told beIN Sports yesterday.

“I would be amazed if he’s not at Arsenal, if he’s not, then that’s hugely disrespectful to the man who did so much for him. ”