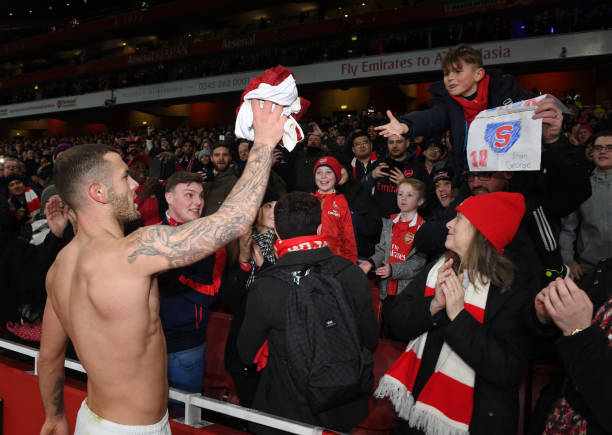 ( Wilshere giving his Arsenal shirt to a fan / Getty )

Arsenal midfielder Jack Wilshere has spent a decade at the Emirates Stadium and his current deal at the club will be expiring at the end of June, him and the club have been quiet on the matter raising concerns that the player will be leaving the club in this summer transfer window.

Wilshere has been termed as a contract rebel by the Arsenal fans who do not understand why he refused to sign a new deal which the club offered him a few months ago. The English midfielder has however hinted that he will be joining Liverpool in this summer transfer window after he seemed concerned about last night’s Liverpool’s final match against Real Madrid as he took to Twitter to wish his fellow Englishmen good luck but most believe that he was indirectly wishing the reds a win because he will be joining them.

What a day of football, have to back the english team! Good luck @JamesMilner @JHenderson ??⚽

“What a day of football, have to back the english team! Good luck @JamesMilner @JHenderson.”

What is has been more about for the Arsenal fans is that their English star Wilshere has even removed the North Londoners from his bio on Twitter which shows how he is preparing for a change of club in the coming weeks.

If the 26-year-old leaves the Emirates Stadium to join Liverpool, he will be meeting up with Alex Oxlade Chamberlain who also left the North Londoners in the last summer transfer window due to no playing time. Wilshere was among the top performers for the gunners in the 2017/18 season and he thought that he had proved to the club that he deserved an improved new deal but the club reportedly gave him a new contract which was to see him get a pay cut.

It is also believed that Jack Wilshere is worried that he is not in the plans of Arsenal new manager Unai Emery who has said that he wants to transform the club to an outstanding team.

Arsene Wenger Keen To Go Back To Japan

Stephan Lichtsteiner Already In London To Complete Move To Arsenal