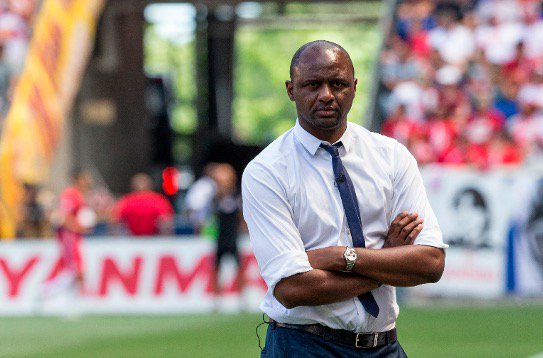 Former Arsenal Star and legend Patrick Vieira was recently appointed Nice’s manager as he left New York City FC to come to the French club where he starts his first role as a manager of a club in Europe.

The gunners were reported to have been interested in signing Nice forward Mario Balotelli because Unai Emery believed that the Italian international would be a great signing for the North Londoners who already have much quality in the attack so the former Manchester City star would make Arsenal more fierce.

Unfortunately for the gunners who are interested in Mario Balotelli, new Nice manager Patrick Vieira is hopeful of convincingly the striker to stay at the club for the up coming seasons yet Arsenal and some other European clubs want to sign him in this transfer window.

“I spoke with him (Mario Balotelli) to wish him happy holidays and to tell him that we are waiting for him on July 2nd.” Nice manager Patrick Vieira told reporters.

Arsenal have been linked with a some defenders but it looks like Unai Emery may want to strengthen all positions as he has been linked with a defensive midfielder so signing a forward is also on the cards, the gunners will however need to look elsewhere since their legend Patrick Vieira is confident that he will keep Mario Balotelli.

Arsenal fans will however be happy about this because most of them were furious on social networks when the transfer rumours linking the gunners with Mario Balotelli because they believe the North London club is perfect in the attack area.

Arsenal Reach An Agreement With Sampdoria To Sign Lucas Torreira