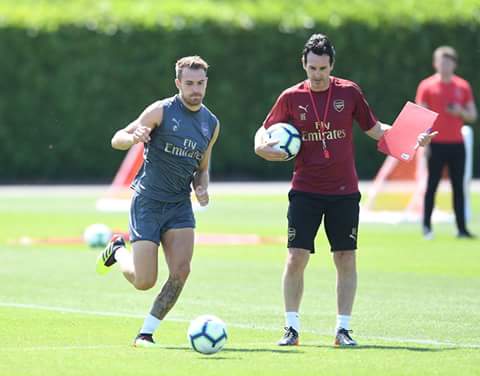 Arsene Wenger resigned from his position as the boss of the gunners in May and the club appointed Unai Emery in the same month, Aaron Ramsey has revealed the differences between the two managers even though he has been with the new Arsenal manager for just two months.

Aaron Ramsey worked under the management of Arsene Wenger for more than five years and the midfielder says that their pre-season is a bit different from that of the Frenchman, and saying that they have done more work towards their tactical side of the game in training than in the past.

“They both are quality managers with their own philosophies. This pre-season has been slightly different.” Aaron Ramsey told reporters.

Aaron Ramsey was among the players that were most favoured by Arsene Wenger when he was still at the Emirates Stadium and even some Arsenal fans used to troll the player on Twitter but it has been quite surprising that gunners new boss Unai Emery has also confirmed that he wants to build his squad around the Welsh international when he has just got appointed.

Arsenal fans have also noticed that Unai Emery is making the players do double training sessions even though Aaron Ramsey didn’t mention it, most of the players have posted pictures to their followers with captions revealing how they are over working in the training nowadays.

Aaron Ramsey has only one year remaining on his current contract at the Emirates Stadium and Arsenal fans are worried that the club might go into the same dilemma in which they were in a few months ago as it desperately tried everything possible to convince Mesut Ozil and Alexis Sanchez to stay at the club.

Arsenal fans would have wished for Aaron Ramsey to reveal whether he feels Unai Emery is a better manager than Arsene Wenger but he however said that they are both incredible managers.