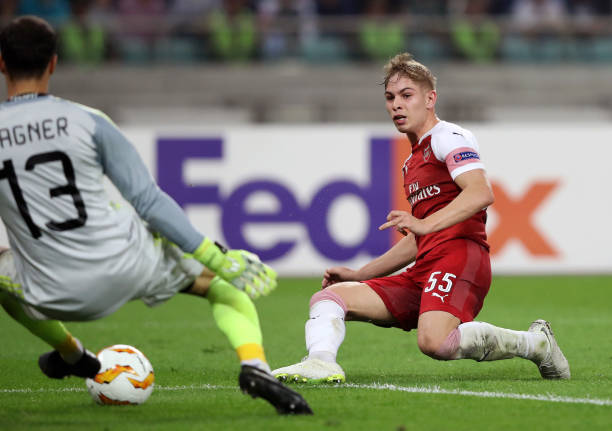 Arsenal played its second Europa League match on Thursday and it this time took place in Azerbaijan, the home of Qarabag. The gunners won the match 0-3 with youngster Emile Smith Rowe also getting on the score sheet on his Europa League debut.

Unai Emery used a simple squad against Qarabag and even included Emile Smith Rowe who has been a promising young player, starting from the Arsenal pre-season matches where he made his breakthrough and even got known by the Arsenal supporters who now love him.

Emile Smith Rowe was given his Europa League debut on Wednesday and the youngster tried to score in the first half but failed even though he had got glorious chances to double Arsenal’s lead after Sokratis Papastathopoulos had given the gunners the lead in the first minutes of the game.

Emile Smith Rowe finally scored for Arsenal for the first time and it came in after the gunners made a swift attacking move which saw Alex Iwobi charge towards the Qarabag penalty box and saw the youngster beside him, he then sent in a pass to Smith Rowe who converted in a well crafted shot which the goalkeeper failed to save hence the gunners doubling their lead.Arsenal boss Unai Emery was asked in his post-match press conference about3 what qualities he saw in Emile Smith Rowe after the youngster put on a splendid performance, he said as quoted by Arsenal Player.

“A little bit of all the qualities he has: physical, mentality and quality with his right foot. Working in combinations with other players.” said Unai Emery.

“If I can say one condition, for me, it’s his mentality. He is humble and he is humble to listen every day in training, in the video analysis and also before the match to continue improving and to keep taking one step more, like today.”