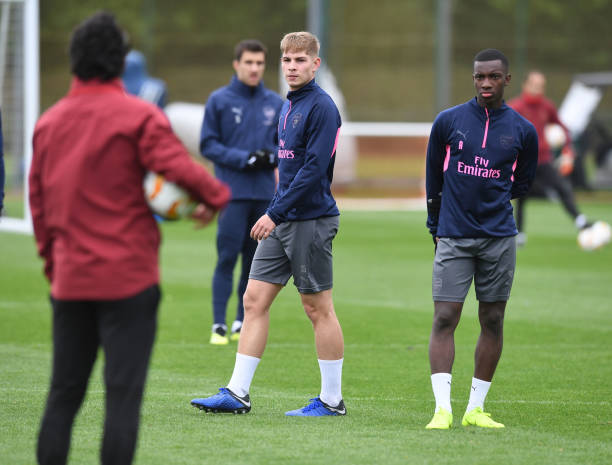 Arsenal appointed Unai Emery as their new manager in May and the new coach has not followed Arsene Wenger’s tradition to mostly use youngsters in the lineups that play the early stages of competitions like Carabao Cup and UEFA Europa League. Unai Emery has however given chances to only two youngsters, Emile Smith Rowe and Matteo Guendouzi but isn’t he forgetting some one more impressive young Arsenal star?

Yes, Unai Emery has been selecting Eddie Nketiah on the team sheet that has played against teams like Brentford, Vorskla and Blackpool but we however haven’t seen the coach bring him into the pitch yet he is a goal scoring machine for the Arsenal Under-23 squad. Eddie Nketiah has the same age as Matteo Guendouzi but unfortunately for him, the position he plays in is congested with many players hence him not getting any chances.

Arsenal played against Sporting Lisbon a few weeks ago and the match was very intense because their opponents played a rough game which saw the gunners lose Stephan Lichtsteiner and Danny Welbeck to injuries. In the second half of the game, the camera shows Eddie Nketiah getting ready to make his first appearance this season but unfortunately for him, Lichtsteiner gets injured and Unai Emery is forced to choose another player who replaces the injured right back.

So that’s Eddie Nketiah story this season, the youngster was impressive last season but he is yet to play for the senior team in this 2018/19 campaign. He will however finally get some chances in the upcoming months since Danny Welbeck is out for a long time which is yet to be communicated.

Arsenal: Matteo Guendouzi Must Be Grateful To Unai Emery