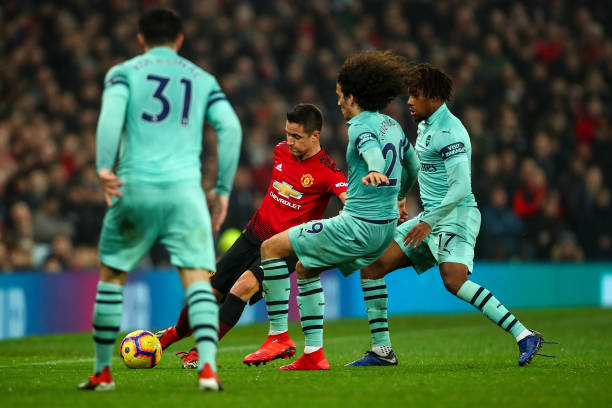 Even Unai Emery can’t lead Arsenal to a win at the Old Trafford. The gunners have made a 2-2 draw with Manchester United who surprisingly regained back their form when facing Unai Emery’s side that was still celebrating their win in the North London Derby.

Arsenal started the match poorly and couldn’t make a five accurate passes because the Red Devils had taken over the midfield because of the absence of Granit Xhaka who would have helped out since he is much stronger than Matteo Guendouzi. The gunners had Alex Iwobi and Kolasinac attacking Manchester United on the wings but the two failed to make any great crosses for Aubameyang.

Arsenal got a corner and Shkodran Mustafi headed the ball, and it got past David Degea but the ball was kicked out of the box when it had already went in, the gunners thought that they were to now fully control the match but they were wrong. A few minutes later, Manchester United received a free kick and Bernd Leno made a great save but the ball was slowly crossed back to the penalty box and Anthony Martial scored to equalise.

Arsenal later lost Rob Holding to an injury and he got replaced by Stephan Lichtsteiner. As the first half was about to end, Aaron Ramsey also got injured and got replaced by Mkhitaryan at the start of the second half.

The gunners looked much better in the second half as they always do and put pressure on Manchester United as they looked for a second goal but the home side was also using counter attacks. Unai Emery then brought in Lacazette who replaced Alex Iwobi. The Frenchman later scored in a dramatic way to give the gunners the lead.

Surprisingly seconds later, Manchester United sent the ball forward and thanks to the poor Arsenal defence, Lingard equalised for the home side in the 69th minute. The gunners were the better team in the last 20 minutes but failed to get a winning goal. So Unai Emery also fails to win at the Old Trafford.