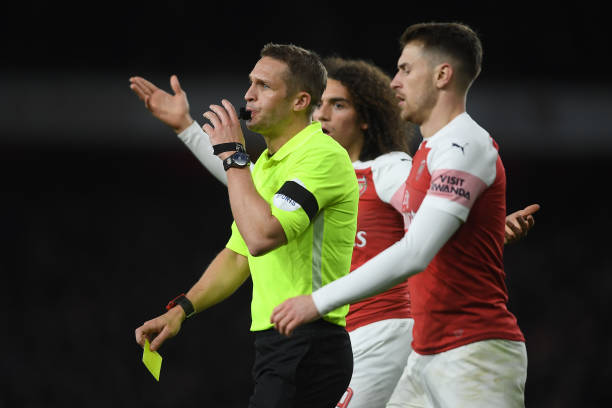 Arsenal has been knocked out of the Emirates FA Cup thanks to goals from Alexis Sanchez, Lingard and Martial. It has been a devastating night for Arsenal fans because they are out of the FA Cup and have lost their best two centre backs to injuries; Laurent Koscielny and Sokratis Papastathopoulos.

Even though Manchester United was on an exciting winning streak but the gooners were still confident that they could get past them because the Red Devils are still vulnerable at the back and the gunners had come with their best squad but things made a U-turn in just 2 minutes. The gunners saw Sokratis get replaced by Mustafi, some minutes later, the Red Devils went into the lead after Sanchez got past Cech and put the ball into the back of the net in the 31st minute.

2 minutes later, Manchester United doubled their lead through Lingard who scored via a low shot and he did his usual dancing celebration that upsets the home Arsenal fans. The gunners now looked for a goal and finally got one through Aubameyang who had to just tap it in. The first half ended 2-1 in favour of

The gunners looked lively in the first minutes of the second half and even almost scored but Mustafi’s header was stopped by Manchester United’s Romero who had a comfortable night due to Arsenal’s failure to shoot outside the box. Lukaku accidentally kickedr Koscielny’s face and the Arsenal captain bled for about five minutes and Unai Emery then brought in Matteo Guendouzi ( replaced Koscielny ) & Ozil in for Alex Iwobi.

The two substitutes did try to move the ball forward but they however failed to break down the organized defence of Manchester United. The Red Devils later made it 3-1 thanks to a goal from Anthony Martial. The match ended 3-1 in favour of Manchester United and Arsenal is out of the Emirates FA Cup.

Arsenal beats Cardiff City 2-1 thanks to Aubameyang and Lacazette

Arsenal 2-0 Chelsea: Koscielny and Lacazette on the score sheet