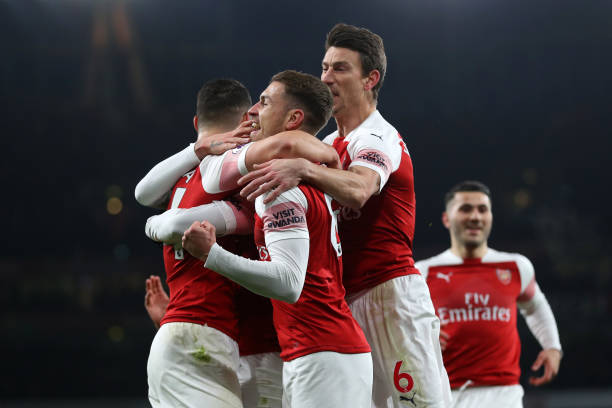 Arsenal has went back to winning ways this evening as Unai Emery’s men have beaten Chelsea 2-0 thanks to two goals from Alexandre Lacazette and Captain Laurent Koscielny in the first half. The gunners had a great performance because they looked solid in most positions for the first time this season.

Unai Emery left Mesut Ozil on the bench today and he then used a 4-4-2 formation, starting Aaron Ramsey as Arsenal’s no.10 and the Wales international had an incredible performance despite being in his last months at the North London club.

This win was important for the gunners if they wanted to keep their Premier League top four hopes alive and they did the job well starting from the first minutes because they pressed the visitors in the opening moments of the game, and finally got on the score sheet in the 14th minute after Lacazette put the ball into the back of the net after receiving a cross from Hector Bellerin.

Arsenal kept putting pressure on Chelsea and came close to doubling their lead but Pierre-Emerick Aubameyang’s volley went wide. The gunners doubled their lead in the 39th minute as Sokratis sent in a cross to Laurent Koscielny who scored using his shoulder.

The gunners remained well collectively at the back in the first 45 minutes of the game hence the game going into halftime with the score board reading 2 nil in favour of the gunners. Chelsea looked more fierce in the second half as they hoped to pull one goal back but they however failed.

Arsenal boss Unai Emery then later took out Alexandre Lacazette and Aaron Ramsey to bring in Alex Iwobi and Maitland-Niles. A few minutes later, Hector Bellerin got injured and was replaced by Mohamed Elneny.

The match ended 2-0 in favour of the gunners and Unai Emery will go home with a proud face.