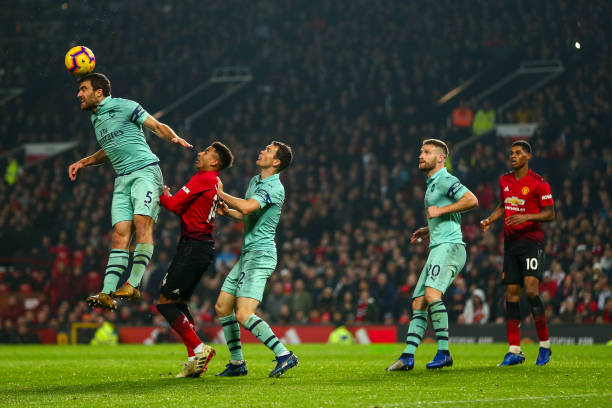 Arsenal’s season has been put under pressure following their 1-0 loss to West Ham away from home. Pellegrini’s side claimed the maximum (3) points thanks to Declan Rice side footed goal in the 48th minutes.

This might proffer insight with regards to Arsenal’s season as the Londoners lie 5th on the Premier League table. The major course of worry for Unai Emery’s Arsenal is that closest rival Manchester United took advantage of that three points dropped despite having a tougher task than the Gunners at the weekend.

This closed the gap on Arsenal as Solskjaer and his wards brighten their chances in the season. Prior to the weekend matches, United were three points adrift of Arsenal. But their away win at Wembley Stadium over Tottenham Hotspur might have steered up another form of worry for Arsenal.

The manner and class with which United went about their dealing was heart touching as Pogba set-up high-flying Rashford. United number 10 did the rest much to the delight of his manager (Ole Gunnar) as he finish expertly with a superb lofted ball in transition from Paul Pogba.

How do Arsenal find themselves in this situation may be a sore memory the club followers would not want to repeat as the Gunners missed it just at the very end. The truth is that the way the Red Devils are playing now they can even win the title if they had been at this level a month back in the season.

Since the departure of manager Jose Mourinho, things seem to have changed drastically both on the pitch and in the dressing room, Arsenal will have to face the heat as they trade tackle with Chelsea in another London battle as Sarri’s men visits with fierce eyes with all to do to avoid defeat after they themselves lost to fellow London side Spurs in the first leg of the Carabao Cup.

Time will tell as Arsenal struggled to deal with the attacking threat of Marko Arnautovic and Brazilian import Felipe Anderson. Will Arsenal finish above United in the League this season? This looks bleak as Pogba and Rashford played a part in closing the gap on Unai Emery and his team.

Both side (Arsenal and Manchester United) are now tied on 41 points apiece with plenty of touch fixture for Arsenal in the coming weeks.