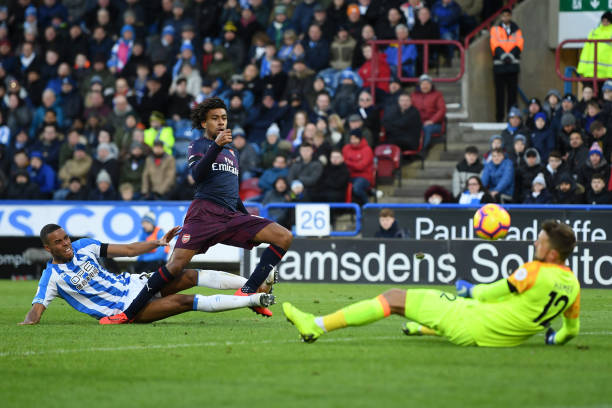 Arsenal has went back to winning ways today after beating Huddersfield Town 3-1 at its home ground. The gunners will remain in the sixth position despite getting the three points because Manchester United won its game.

This was a much-needed win for Unai Emery and Alex Iwobi, a player who received a lot of criticism after the defeat to Manchester City was the one to give the gunners the lead in the first half. The Arsenal team was having a hard time in controlling the ball in the minutes before that goal but after it went, it gave the some sort of confidence. Credit also needs to go to Sead Kolasinac who gave Iwobi a wonderful pass.

The gunners were however still looking sluggish and Shkodran Mustafi was obviously in a bit of panic as he made some errors which could have cost his team the three points. Ainsley Maitland-Niles crossed the ball to the penalty box of Huddersfield Town and Lacazette tapped it in to hand the gunners a 2 nil deal. The gunners went in a rare halftime lead thanks to two goals from Alex Iwobi and Alexandre Lacazette.

Huddersfield Town dominated the match in the second half and looked composed with the ball until they reached the final third while Arsenal sat at the back and invited them to attack them. Unai Emery later subbed off Lucas Torreira to bring in Mohamed Elneny so that the young Uruguayan international could get some rest since he has been overused and is fatigued.

Alex Iwobi did get some chances in the second half but he wasted them because he was going for goal yet he would have passed the ball to Lacazette who was in better positions. Denis Suarez was brought into the game with a quarter of an hour to go before the match ends, he replaced Mkhitaryan who was involved in the two goals which the gunners scored. Joe Willock was also brought into the game in the last minutes of the game.

Just as the Arsenal fans thought that they were going to get their first Premier League away clean sheet, Sead Kolasinac scored an own goal in the last moments of the game.