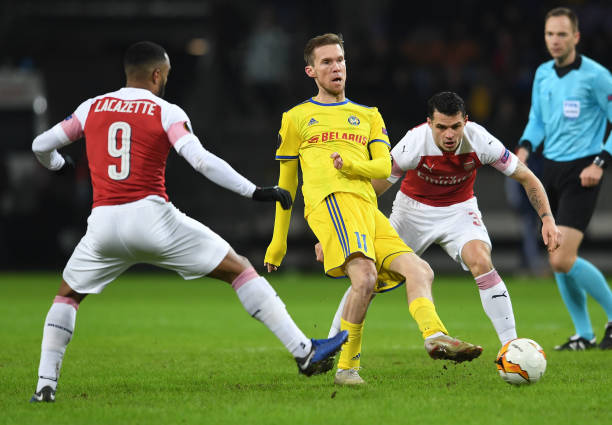 Arsenal has lost 1 nil to BATE Borisov away from home in their first leg of the UEFA Europa League round of 32 and even though the gunners could over turn this at the Emirates, some questions will be asked about Arsenal’s chances of winning this competition if it progresses to the next round.

So here we are now, the gunners traveled to Belarus without Mesut Ozil and their defeat to Bate Borisov clearly shows that the Arsenal coach needs to give more chances to the German international because he can bring much to the team. The gunners started the match well, they were in full control in the first 15 minutes despite being away from home but they wasted their chances.

Mkhitaryan and Lacazette got glorious chances but missed them not knowing what the game had in store for them in the next couple of minutes. As the first half wasn’t about to end, Bate Borisov got a free kick and they headed home hence going into the halftime break with a one goal lead. Most of the Arsenal fans were hoping to see what Unai Emery was going to do in the second half because he has this season shown that he likes making quick substitutions but he didn’t this time.

BARYSAW, BELARUS – FEBRUARY 14: Pierre-Emerick Aubameyang (R) of Arsenal and Evgeni Berezkin of BATE Borisov vie for the ball during the UEFA Europa League Round of 32 First Leg match between BATE Borisov and Arsenal at Borisov-Arena on February 14, 2019 in Borisov, Belarus. (Photo by MB Media/Getty Images)

Bate Borisov was very compact and were composed at the back, and were always breaking down the predictable Arsenal attacks on the flanks. They were also successful in stopping the gunners from using through balls because they isolated Lacazette and Aubameyang ( last minutes )

Unai Emery later brought in Lucas Torreira and Pierre-Emerick Aubameyang replacing Maitland-Niles and Granit Xhaka. These two didn’t make a big of difference because the gunners failed to make use of its possession, Sead Kolasinac was also then replaced by new signing Denis Suarez. In the last minutes of the game, Lacazette got fouled but he elbow an opponent out of frustration hence receiving a direct red card. It’s been a frustrating night in Belarus.