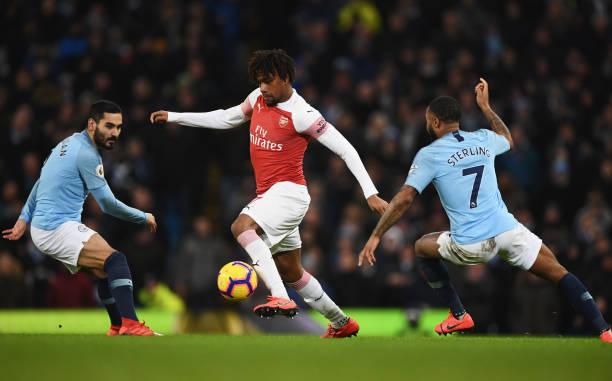 Manchester City defeated Arsenal 3-1 at the Etihad thanks to a hat-trick by star forward Sergio Aguero. The Argentine striker scored in each half to condemn Unai Emery’s side to another 3-1 defeat in space of days after the 1-3 home loss to the Red Devils.

The win gives City an advantage as they close up the gap to 3 points as league leaders Liverpool made a 1-1 draw with West Ham United.

The forward took just about 50 seconds to get on the score sheet as he sets the tone for Arsenal’s defeat in the contest.

Aguero was at the right place to poke home the second goal as Arsenal’s defense was widely exposed yet again this season.

The Gunners were taught a huge lesson at the Etihad as the score line proved the true reflection of the match.

Despite Arsenal’s dominant showings all season, they were outclassed in the midfield as the likes of David Silva, Ikay Gundogan and Bernardo Silva bossed the midfield to perfection.

This gave them the upper hand in the fixture as they split the Gunners defense with ease to set up Aguero for his hat-trick.

As Arsenal was losing to Manchester City, the Red Devils had already secured the three points they needed against Leicester City. This they did with a narrow 0-1 win at the King Power Stadium.

Bright star Marcus Rashford got the only goal of the game as he timed his run to get to the sublime pass from Paul Pogba to give United the lead (0-1).

This is a cause of concern for Arsenal as the Red Devils close them down on points. With Ole Gunnar’s men picking up points here and there, the Gunners might be in for a shocker in the days ahead.