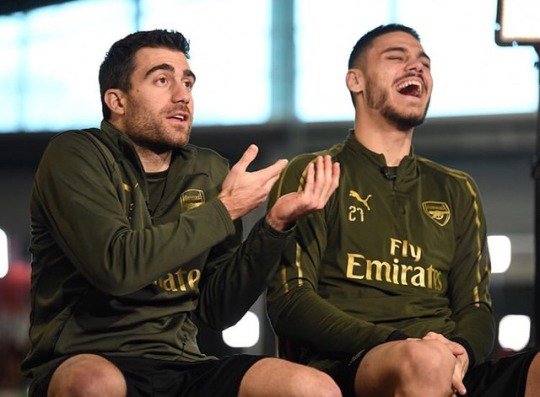 The gunners signed Sokratis Papastathopoulos in the 2018 Summer transfer window and he has been impressive for the gunners this season even though it is his first season at the Emirates Stadium. Both Mavropanos and Sokratis are from Greece and they are now teammates at Arsenal this season.

Dinos Mavropanos joined Arsenal in the January transfer window and he did get some opportunities at the end of last season, and in those few games, he won the hearts of the Arsenal supporters because they believe that he could be an outstanding player if given more chances. The Arsenal supporters hope that Unai Emery will one day drop Shokdran Mustafi to play Dinos Mavropanos because they have huge hopes in him.

Sokratis Papastathopoulos might have the same thoughts as the Arsenal fans as he has said that he believes that Dinos Mavropanos has the potential and talent to become better than him. Sokratis said this in an interview with Gazzetta.

“Dinos can become much better than me and it will be bad for him to have Papastathopoulos as a ceiling.” said Sokratis.

“I am telling you that Mavropanos has all the assets to become better than Papastathopoulos.”