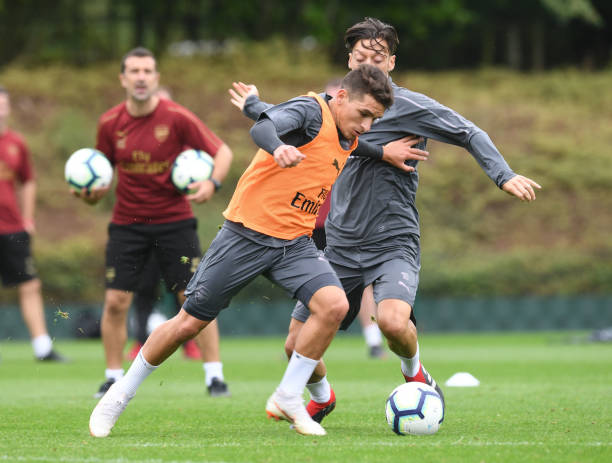 Arsenal will be making a trip to the Wembley Stadium to face Tottenham Hotspur and it’s going to be a must win game for the gunners if they want a top four finish. The Arsenal players including Mesut Ozil, Lucas Torreira and Sokratis Papastathopoulos trained today to get in shape for this game.

Sokratis returned from an injury a few weeks ago but he has been solid at the back because the gunners have conceded just once in the last three matches in which he has played in. The Greek international will probably be in the starting eleven and the gunners will be hoping that he puts on a great performance, because Tottenham’s striker Harry Kane usually scores against the gunners.

Sokratis Papastathopoulos has sent a message to the Arsenal fans ahead of the match and he wrote;

Ready for the #NLD. Respect all, fear NONE. Victory is always earned, never given. @Arsenal #NorthLondonDerby #Papa5 #PremierLeague pic.twitter.com/THeZtLU2tL

“Ready for the #NLD. Respect all, fear NONE. Victory is always earned, never given. Arsenal #NorthLondonDerby #Papa5 #PremierLeague”

Most of the Arsenal fans will be hoping to see Mesut Ozil on the team sheet that faces Tottenham Hotspur because he scored in their previous match but Unai Emery refused to give a direct answer as to if he will start him. So we will have to wait until the lineup gets released.

The German international also sent a message to the Arsenal fans after they finished training. He wrote;

The Uruguayan international has been one of the best Arsenal players this season and his services will tomorrow be needed in the North London Derby. In December, he scored a stunning emotional goal that sealed Arsenal’s 4-2 win over Tottenham Hotspur.

The Uruguayan international has also used Twitter to speak out on this game. He wrote;