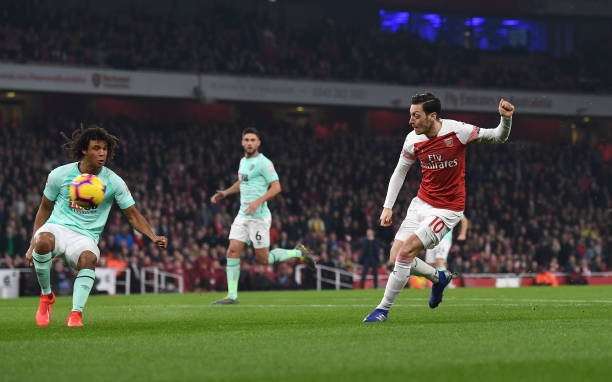 Arsenal midfielder Mesut Ozil has a special unique bounce finish that he has been using in the last few years he has been at the Emirates Stadium. The first time he used that skill as an Arsenal player, many claimed that it was done by mistake but he has however proved everyone wrong that he’s just good at it.

Unai Emery included Mesut Ozil in the starting eleven of Arsenal that faced Bournemouth and a pass from Sead Kolasinac saw Mesut Ozil score through his trademark technique to give the gunners the much desired lead in the first minutes of the game. Arsenal boss Unai Emery has today commented on Mesut Ozil’s bounce finish ahead of the North London Derby.

“Each player has their skills. Ozil has the confidence to shoot like that, I think it’s amazing that football can have players can have this skill and do different things on the pitch.” Unai Emery told Football.London.

Mesut Ozil has this season not been in good terms with Unai Emery according to reports but it will be a satisfying for the Arsenal fans to see the coach praising the German international because they wouldn’t want internal problems that will divide the club.

Lacazette reveals the truth about his rivalry with Aubameyang