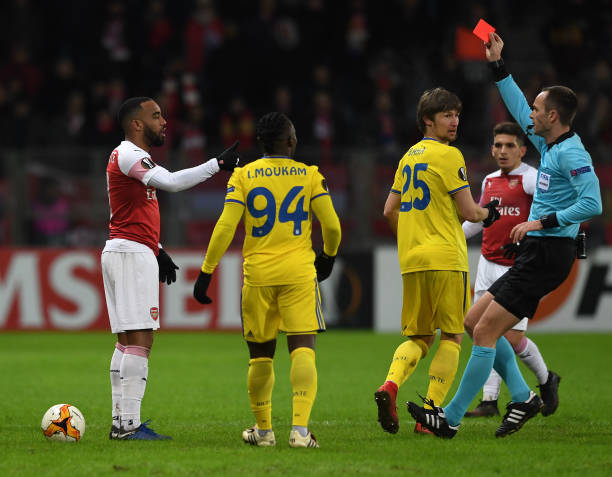 Arsenal will face Rennes on Thursday but they will however be without Alexandre Lacazette who received a straight red card in Arsenal’s match vs BATE Borisov away from home. Alexandre Lacazette hit a player with his elbow and the referee pulled out the red card and UEFA later extended the suspension to two more matches.

Some Arsenal fans thought that Alexandre Lacazette would only miss the match against BATE BORISOV at the Emirates Stadium and they were surprised to see that the French striker will miss both of the legs of the UEFA Europa League round of 16. Alexandre Lacazette was not in the selected Arsenal squad that Unai Emery traveled with to France because he is still serving his suspension.

Arsenal head coach Unai Emery faced the media as soon as he arrived in France to give his pre-match thoughts ahead of the game. The Arsenal boss revealed that he spoke with Lacazette about the red card and told him that he believes that he will miss three games, he also said that they have enough players to cover for the French attacker.

“It is between one and three for the suspension. But we have players and we have confidence for other players to play without Lacazette in this match.” Arsenal boss Unai Emery told Arsenal.com.

It seems Arsenal’s boss Unai Emery is not worried that they will struggle vs Rennes without Alexandre Lacazette according to what he said. The gunners will be hoping that Aubameyang does the job in both legs because he will hugely be needed if they are to go to the UEFA Europa League quarter finals.

Matteo Guendouzi reveals why Unai Emery starts him in most matches