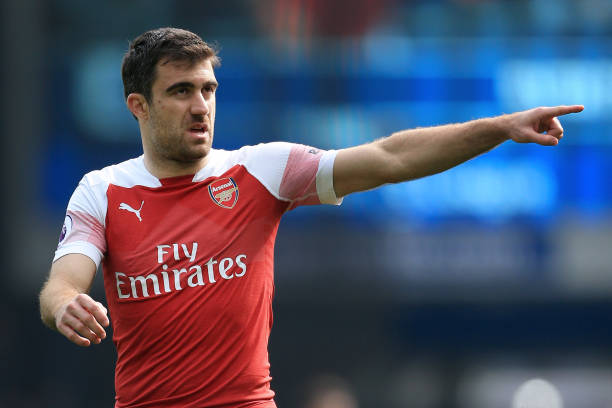 Arsenal defender Sokratis Papastathopoulos did not take part in the 0-1 win over Watford on Monday because he is suspended but he is however eligible to take part in the UEFA Europa League. Sokratis played in the first leg against Napoli as the gunners won the game 2-0 at the Emirates Stadium.

There’s a lot of talk on if Arsenal will be able to keep their 2-0 lead on aggregate since they have been shocking away from home this season and they are always mentally weak in hostile stadiums like the one they will be playing in today. Arsenal defender Sokratis was yesterday with Unai Emery in the pre-match press conference and he spoke of what the gunners must do to ensure that they can beat Napoli at the San Paolo Stadium.

Arsenal are currently leading by two goals on aggregate and Sokratis says that they will have to play like the score is 0-0 since them playing with the comfort of being two goals ahead could backfire since Napoli will be aggressive at home.

“Tomorrow we have to play like the game is 0-0. Napoli is one very good team. It will be difficult for us but we have to be focused for 95 minutes and to do our work, our style of the game.” Sokratis told Arsenal Media.

Arsenal fans will be happy with the return of Sokratis because he has been their best centre back this season despite being new to the Premier League and the playing style of the gunners.

Unai Emery reveals his game plan for the match against Napoli