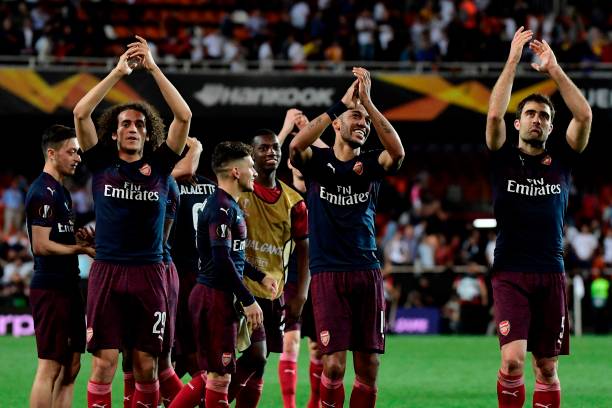 ( Arsenal players appreciating support from their fans / via Getty )

The gunners have qualified for the UEFA Europa League final after successfully defeating Valencia 7-3 on aggregate. Arsenal will now face their London rivals Chelsea in the UEFA Europa League final in a few weeks now and it will mean more for the North Londoners since this will be a perfect opportunity to secure Champions League football given that they have failed to get a Premier League top four finish.

It was nice to finally see Pierre-Emerick Aubameyang get a hatrick after many failed attempts but it seems like he was keeping it for the UEFA Europa League semi finals. The Gabon international equalised for the gunners in the first half and Lacazette gave them a 1-2 lead thanks to a great move which saw him make a beautiful turn and put the ball into the back of the net.

Arsenal’s defence once again let their forward line down as Valencia made it 2-2 but Aubameyang made it 2-3 thanks to a beautiful cross by Ainsley Maitland-Niles. This calmed down the home supporters who had got hope of making a come back in this match, Aubameyang then later got his third goal of the day after an impressive move by the Arsenal players. So the score line ended 2-4 in favour of Arsenal in Valencia and this has taken them to the UEFA Europa League final, Unai Emery will be hoping to win this competition in his first season so that he can show to the Arsenal fans that he is the right man for the job.

So Arsenal will face Chelsea in the UEFA Europa League final in Baku, it will be interesting to see who comes out as the winner because the gunners really need to win this competition for a couple of reasons.

Arsenal 1-1 Brighton: Gunners to either finish 5th or 6th