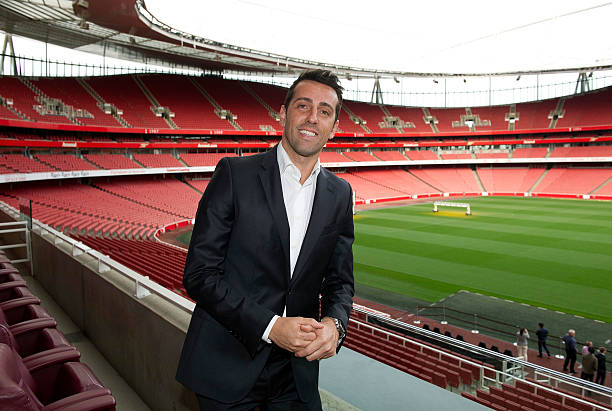 Edu Gaspar has now officially joined Arsenal as the technical director and this is something we’ve known about for months but as reports months ago claimed, the Arsenal legend arrives at the Emirates Stadium after the Copa America and he definitely comes with a smile as Brazil won the competition.

Edu Gaspar is Arsenal’s first technical director and the club will be hoping that he does a great job in this role as the fans were not happy with the top officials for letting go of Sven Mislintat when he was one of the best scouts in the world. Arsenal has hired Edu Gaspar because he was a great candidate for the job and he has the Arsenal DNA as the club will offer him the power to work on transfers, and many other things with Unai Emery and the first team coaches.

Arsenal’s structure has changed a lot ever since Arsene Wenger left the Emirates Stadium in 2018 and head of football Raul Sanllehi has said that appointing Edu Gaspar was the final jigsaw in the new structure that they have set up at the club.

“His arrival is the final and very important part of the jigsaw in our development of a new football infrastructure to take us forward.” Raul Sanllehi told Arsenal.com.

“He will be working closely with Unai Emery and the first-team coaches, and will play a relevant role leading our football vision and ensuring we have – and follow – a solid philosophy through all our football activities.”

BIRMINGHAM, UNITED KINGDOM: Arsenal’s Edu celebrates scoring his goal to end the match 2-0 during their premiership match at home to West Bromwich, 02 May 2005. AFP PHOTO/ CARL DE SOUZA. No telcos, website uses subject to subscription of a licence with FAPL on www.faplweb.com (Photo credit should read CARL DE SOUZA/AFP/Getty Images)

Edu Gaspar is one of Arsenal’s legends as he was part of the squad of the invincibles but he however left the North London club in 2005 and later retired in 2010. He was the general coordinator of the Brazil football federation and has left after helping the South American country win the 2019 Copa America.

Edu Gaspar is obviously happy to return to Arsenal and he said that the gunners have always had a special place in his heart and that he is looking forward to making a difference.

“Arsenal has always had a special place in my heart and I’m thrilled to be returning to this great club in this new role.” said Edu Gaspar.

“We have a strong squad and some very talented young players with fantastic people at every level. I’m looking forward to helping make a difference.”