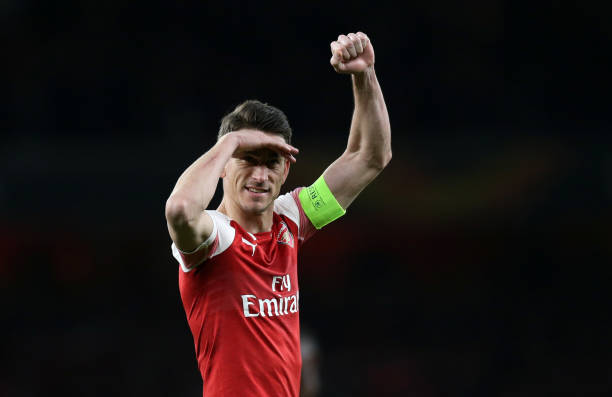 Arsenal defender and captain Laurent Koscielny has officially left the Emirates Stadium today to join French Ligue one side Bordeaux after falling out with the club. Koscielny refused to travel to USA with his teammates and missed all of Arsenal’s pre-season matches.

Laurent Koscielny leaves Arsenal after having been with the club for nine years and even though he has decided to leave the North London club sourly, the fans will always remember him for some great moments with the most memorable one being his equalising goal in the FA Cup final in 2014 which helped the gunners to go on to win the competition to end their title drought.

It’s unclear on what internal problems that Koscielny had with the club hierarchy but most reports claim that he wanted Arsenal to let him go for free but they however refused and will receive €5million from his sale.

“We thank Laurent for his contribution to the club and wish him all the best for the future.”

Arsenal youngster Eddie Nketiah is reportedly on the verge of getting loaned to Bristol City after he had incredible performances in this year’s pre-season matches. Eddie Nketiah has attracted interest from a lot of Championship sides but various reports in England have said that Bristol City have won the race.

It’s also being reported that Eddie Nketiah will tomorrow undergo a medical at Bristol City ahead of a season long loan.

Mohamed Elneny has been at Arsenal for three years now but he has however failed to get into the starting eleven under two managers and it looks like Joe Willock could also be ahead of him as the youngster has impressed Unai Emery in pre-season.

Elneny just returned to Arsenal a few days ago to prepare for the upcoming season but current reports from Turkey claim that he could move to Galatasaray in this summer transfer window.