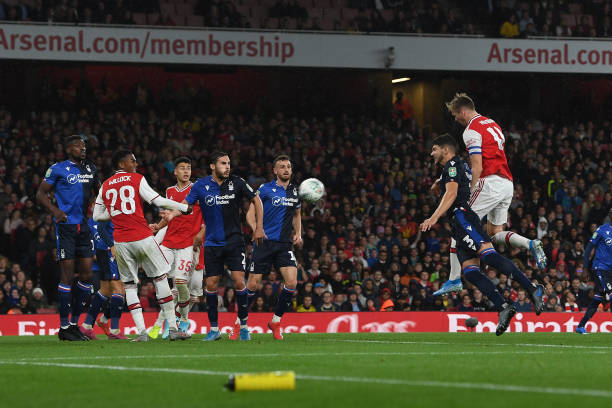 Arsenal have now made it three wins in their last three matches after beating Nottingham Forest 5-0 last night with four youngsters getting on the score sheet. The gunners started the match with a young squad and also Kieran Tierney and Rob Holding were put in the starting eleven so that they can get minutes as they wait for their Premier League return.

Goals from Martineli (2), Holding, Willock and Nelson were enough to knock Nottingham Forest out of the Carabao Cup and Unai Emery was certainly happy with that performance because the played some beautiful football and were dominant throughout the whole 90 minutes. So here are some of the talking points from the match.

LONDON, ENGLAND – SEPTEMBER 24: Kieran Tierney of Arsenal during the Carabao Cup Third Round match between Arsenal and Nottingham Forest at Emirates Stadium on September 24, 2019 in London, England. (Photo by Stuart MacFarlane/Arsenal FC via Getty Images)

Kieran Tierney looks like he will be an incredible player for the gunners because he was very good in defence and his crosses were fantastic, unlike Sead Kolasinac, he is very quick to release the ball and Aubameyang will surely feast on those balls from the Scottish international. Hopefully, he will be in the Arsenal starting eleven that will face Manchester United on Monday.

Calum Chambers has done enough to be given a chance in the starting eleven and his performance against the Championship side has surely earned him a place in the squad that will face Manchester United. The young Englishman assisted both of Martineli and Nelson’s goals. Unai Emery has to start him against Manchester United.

Martineli had a great performance as he scored two goals and the first one was very hard to score but he showed striker instincts to make that run and head the ball into the back of the net. He has a nice engine and can press for a full game which is great as Unai Emery wants all players to try to win the ball.

LONDON, ENGLAND – SEPTEMBER 24: Hector Bellerin of Arsenal during the Carabao Cup Third Round match between Arsenal and Nottingham Forest at Emirates Stadium on September 24, 2019 in London, England. (Photo by Stuart MacFarlane/Arsenal FC via Getty Images)

Hector Bellerin made his return to the pitch in the last minutes of the game and he immediately got an assist. The right back assisted Joe Willock who also had an impressive performance in this game and all this is just giving Unai Emery more headache as he has many options in central midfield.

Rob Holding played the full 90 minutes and even got a goal as soon as he put on the armband, what a script that was! Nottingham Forest didn’t offer much threat going forward but whenever they came, Holding and Mustafi seemed calm and dealt with the danger accordingly.

It was unfortunate that Emile Smith Rowe got injured in the first half but his replacement Bukayo Saka put on yet another incredible performance as he created some great chances and deserves to start against Manchester United. Mesut Ozil was the captain of the night and he was everywhere on the pitch and created six chances but he however got subbed off in the second half. It was a great night for the gunners and Unai Emery will now be hoping that they get confidence from their last three matches to beat Manchester United.