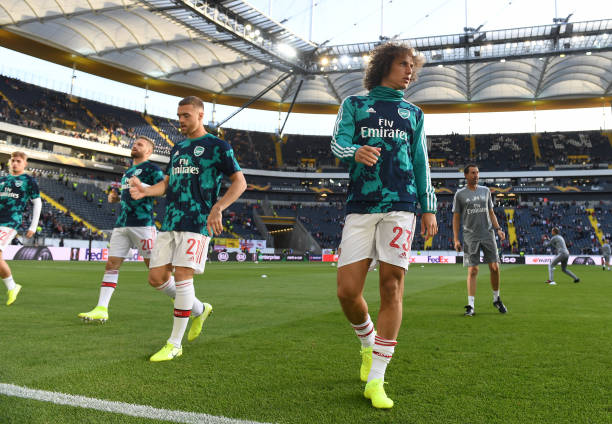 Arsenal will tomorrow make a visit to Carrow Road to face Norwich City and they will be hoping to start the new month with a win since they failed to get one in the whole of November. Arsenal was on Thursday struck with new injuries when they took on Eintracht Frankfurt, the club has now released the latest team news.

David Luiz was deployed as a defensive midfielder in Arsenal’s UEFA Europa League match on Thursday but he however got a rib injury and was subbed out by Unai Emery. The club has confirmed that David Luiz isn’t totally out of the match against Norwich City and that he will be assessed before he can be cleared to play in this game.

LONDON, ENGLAND – NOVEMBER 02: Dani Ceballos of Arsenal is challenged by Ruben Neves of Wolverhampton during the Premier League match between Arsenal FC and Wolverhampton Wanderers at Emirates Stadium on November 02, 2019 in London, United Kingdom. (Photo by David Price/Arsenal FC via Getty Images)

Dani Ceballos has been injured ever since he came out in Arsenal’s 1-1 draw with Standard Liege and it looks like the fans will have to keep waiting to see him as the club confirms that the central midfielder will be returning in the middle of December. The gunners will definitely need him in this tough and tight schedule that they have in December.

Ljungberg provides an update on Bellerin and Tierney injuries