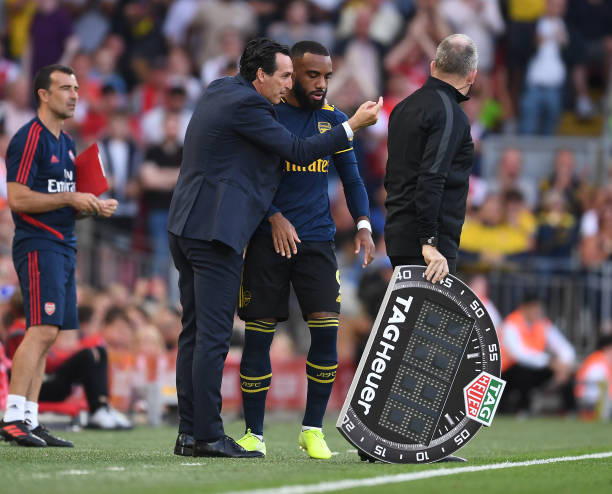 Alexandre Lacazette suffered an ankle injury in Arsenal’s 2-2 draw with Tottenham Hotspur and even though the gunners are third on the Premier League table, they have still missed the French striker because he brings so much to their team despite scoring less than Pierre-Emerick Aubameyang.

Arsenal will on Monday face Sheffield United away from home and most gooners will be hoping that Lacazette is in the starting eleven or in the 18 man squad but let us take a look as to why Unai Emery might leave him home even though he has reportedly returned to full training.

Even though Alexandre Lacazette has only been on the sidelines for a month but there might be a possibility that the team doctor tells the club to first give him some minutes in some matches with U-23 squad. So Unai Emery might decide to leave him out of the squad that plays in their upcoming Premier League match so that he could first get up-to speed in some U-23 matches as they are less competitive and are played at a less intensity than that of the Premier League.

Arsenal head coach Unai Emery is said to be a very strict man who wants his players to work hard in training and if you don’t then you are left out of the 18 man squad. It is believed that this is one of the reasons why Ozil hasn’t been playing in the last few weeks.

So if Alexandre Lacazette isn’t 100% fully fit to play then the Spanish boss will definitely leave him out as they already have another reliable option in Pierre-Emerick Aubameyang.

3. AUBAMEYANG IS A MAN ON FORM SO WHY BRING IN LACAZETTE

Arsenal head coach Unai Emery has always preferred to use one striker upfront but Lacazette’s performances and fan pressure has made him start using them together but with the Gabon international going on the flank to accommodate the former Lyon star.

However, Pierre-Emerick Aubameyang has been fantastic this season without Lacazette, he was even selected as the player of the month for September for his incredible performances so it would definitely be a bad idea to put him on the flank because of Lacazette when he has been impressive in the striking role.

Alexandre Lacazette is a very important player at Arsenal but his return will likely be in the UEFA Europa League tie against Vitoria SC in Portugal as Unai Emery might not use him against Sheffield United because of the above reasons.