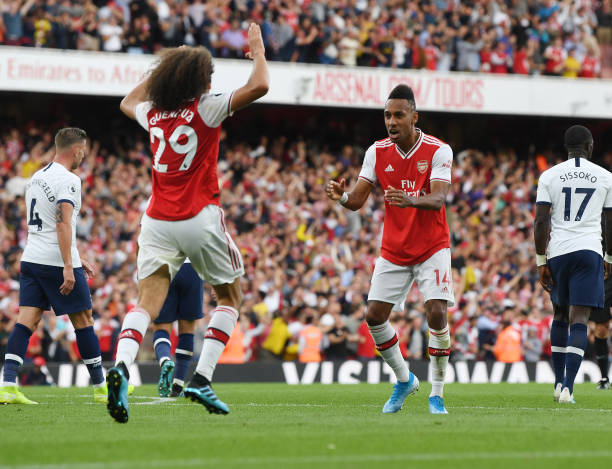 ( Guendouzi and Aubameyang / Photo via Getty )

Arsenal made a 2-2 draw with Tottenham Hotspur on Sunday and this has seen them go into the fifth position with seven points and will be back in action after two weeks. It was an emotional game because the gunners came from two goals down to get a point.

Ericksen opened the scoring for Spurs after a shot saw Bernd Leno punch the ball a bit far away from him and the midfielder then put the ball into the back of the net. Harry Kane as usual went on the score sheet thanks to a penalty that Granit Xhaka caused by making a reckless tackle in the first half.

The gunners looked emotionally shuttered after the second goal went in but they however went back into the game thanks to Alexandre Lacazette who showed his brilliance by controlling the ball from Pepe to pull one back for Unai Emery’s side. The first half ended 2-1 in favour of Tottenham Hotspur.

Arsenal looked so much better in the second half as they kept pushing for an equaliser and finally got one through Aubameyang who finished off a great pass from Matteo Guendouzi. This goal fired up the Emirates Stadium and the introduction of Dani Ceballos had brought a lot more spark to the midfield of the gunners. Due to Lacazette’s injury, this meant that Unai Emery had to put in Henrikh Mkhitaryan and the Armenian international put on a disastrous performance.

Despite late chances for both sides, the match ended 2-2 and Unai Emery will try to pick some positives from this game but negatives still persist in his side.