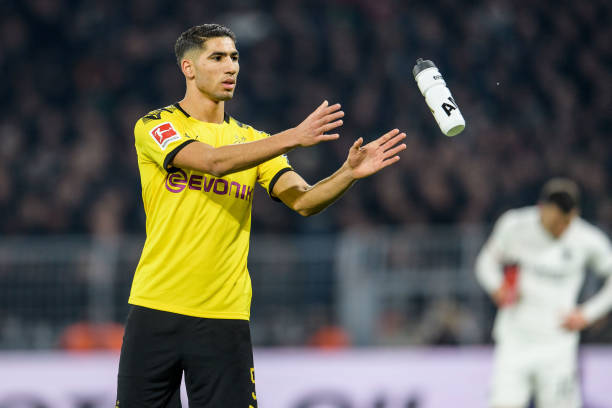 ( On loan Real Madrid right back Hakimi / Photo via Getty )

Achraf Hakimi will be one of the hottest products in the transfer market when it opens because his loan spell at Borussia Dortmund has been incredible and this has seen a number of top European clubs including Arsenal be on standby.

Achraf Hakimi is a Real Madrid player but he was however sent out on loan at Borussia Dortmund and he has so far made 10 assists in the Bundesliga this season which has seen many football pundits say that he will be one of the best right backs in the world in the coming years. The Athletic reports that Achraf Hakimi is wanted by a number of clubs including Arsenal and this surely brings a lot of questions to gooners because the club signed Cedric Soares on loan in the January transfer window and everyone believes that his move to the Emirates Stadium would be made permanent.

Arsenal’s head coach Mikel Arteta has shown that fullbacks are a big part of his game plan and since Achraf Hakimi is one of the best overlapping fullbacks then this could show why the North Londoners are pursuing him as he could unlock Nicolas Pepe who has always said that wants to play with an overlapping right back. Alejandro Camano who is Hakimi’s agent has spoken out on the transfer rumours, saying that he will soon be having a discussion with both Borussia Dortmund and Real Madrid about his client’s future.

“The contract with Real Madrid is still the one we negotiated in 2017 and that runs to June 2022.” Alejandro Camano told Spox as per Daily Mail.

“We’ll have to wait and see. After the coronavirus crisis is over, we’ll sit down with Real Madrid and Borussia Dortmund to discuss the matter.”

Arsenal fans are very happy at the possibility of signing Hakimi as they’ve begun sharing compilations of the highly rated 21-year-old as he could soon become a Gunner.

Achraf Hakimi has been amazing for Dortmund this season🔥