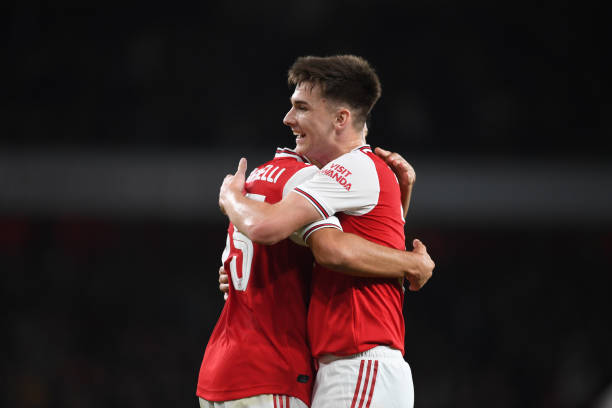 ( Tierney and Martinelli / Photo via Getty )

The gunners completed the signing of Kieran Tierney in the summer transfer window and he has only managed to play a few number of games due to a shoulder injury that he sustained in Arsenal’s 3-1 win over West Ham United at the London Stadium. The Scottish left back has spoken out on the player that surprised him the most at Arsenal when he arrived.

Kieran Tierney became a fan favourite in his first few appearances for Arsenal as he showed that he could be an outstanding for the North Londoners as he quickly managed to get two assists and his crossing surprised most gooners since they had spent a long time urging the club to sign a great crosser of the ball. Arsenal recently organized an AMA session so that the supporters can ask Kieran Tierney any question and one of them asked him about the player that surprised him the most, and he said that Gabriel Martinelli’s intensity surprised him.

“When I first did a full training session with the team I was put up against him and the intensity of his play was honestly mindblowing and I thought to myself this is the standard I need to be at to play for Arsenal.” said Tierney in the AMA session.

Gabriel Martinelli arrived at Arsenal in the summer as well and he has also won over the hearts of the Arsenal supporters as no-one expected him to be able to get 10 goals in his first season at the Emirates Stadium despite being just 18 years old. And it looks like Martinelli is not only impressive on the pitch but also in training as Kieran Tierney has revealed that the young Brazilian international surprised him.

Tierney and Tierney have formed a great relationship on the pitch as the former Celtic star has assisted the 18-year-old two times already despite playing a few games together. The Arsenal fans will be looking forward to seeing them together once more when the Premier League returns.

Arsenal release statement on the finishing of 2019/20 season