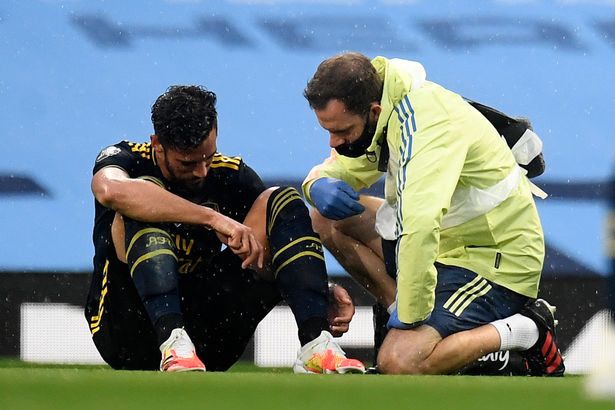 Arsenal played their first match after 100 days against Man City at the Etihad stadium. The Gunners lost not just by the scoreline but also to injuries with two men sustaining injuries.

Going into the match Arsenal had Torreira and Chambers on their injury list while Sokratis joined the list shortly before the match.

Arsenal suffered a double injury blow in the first half of their 3-0 loss to Man City Granit Xhaka and Pablo Mari the victims.

It has been confirmed that Pablo Mari who sustained a serious ankle ligament/tendon injury may need surgery and is done for the season.

Mari has played just over 200 minutes for the Arsenal first team. The center-back’s loan from Flamengo contained an option for Arsenal to buy, but the lack of meaningful minutes coupled with the financial strain caused by the Covid-19 pandemic will make that decision exceedingly difficult.

Granit Xhaka who left the match against City inside ten minutes with an ankle injury, may return before the campaign ends.

Sokratis’s injury was picked up early this week in training and is understood to be a day-to-day, small knock. His status for for Sunday’s match against Brighton is yet to be determined.

Lucas Torreira has been back in training for a some time now and may be available this weekend. If not, he’ll return soon after.

Callum Chambers remains sidelined until August or September after he tore his ACL last year. This leaves Arsenal with only two fully fit centrebacks following the suspension of David Luiz.

Arsenal will turn to their forgotten man Rob Holding who was once impressive and praised highly by fans before he suffered a nasty injury that may have affected his game.

Fans will be hoping for a solid performance from Holding alongside Mustafi in central defence following some horrific scenes from David Luiz.