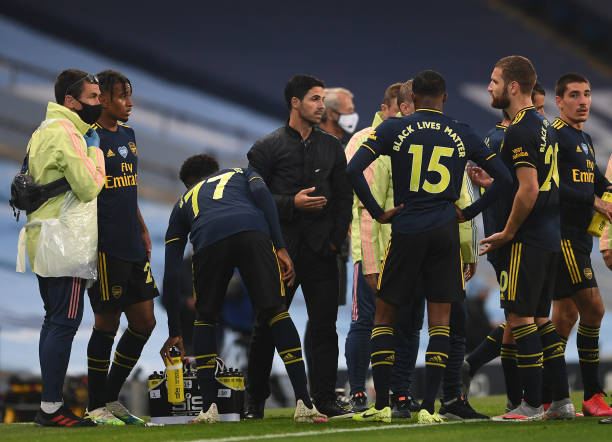 After a about 100 days Arsenal returned to action at last only to have an evening to forget in Manchester City as they resoundingly lost by 3 goals.

On the evening some of the scenes weren’t new to The Gunners as old woes came back to hit the hard, here is what we came to learn and summarise about the match.

This has been Arsenal’s biggest problem this season and arguably the entire past decade. The main culprit being David Luiz who put on a disaster cameo.

The Brazilian defender was brought in midway in the first half and made a schoolboy error that led to Man City taking the lead just before halftime.

It got worse for Luiz as he shoved Riyad Mahrez in the box which led to a penalty and a red card all this happening in a space of 25 minutes.

Fans and pundits were left asking themselves WHAT WAS HE THINKING?! It was embarrassing considering how experienced Luiz is yet he was making such blunders.

Luiz gets sent off after a foul

Luiz might have played his last game for the club with his contract expiring in a few weeks, the board should definitely consider the purchase of a defender.

This is another issue the Gunners have had for a while. One would have expected the players to be fresh after 3 months without playing however it was barely 5 minutes of play when Granit Xhaka had to be stretchered off.

It got worse as Pablo Mari limped off in the 24th minute as Arsenal sustained two injuries in their first match.

The players are being assessed but as thing look they might be set to be on the sidelines for some time.

Arsenal struggled to create anything of real chances the whole evening, so picking Aubameyang out for special mention may be harsh.

But The Gunners’ captain and talisman simply offered nothing.

Aubameyang was totally off form in the match

Whether he’s trying to earn himself a big contract, or put himself in the shop window, he’s got off on the wrong foot after the restart.

More concerning for Arteta will be if his captain is already downing tools, particularly when they need him now more than ever.

4. Prodigy over experience. A gamble or not?

Fans were left surprised and with raised eyebrows once they saw the team selection. Arteta opted to start Willock, Guendouzi, Nketiah and Saka over the experienced players like Ceballos, Pepe, Lacazette and even Ozil who was not even on the bench for tactical reasons.

It may or may not have been a tactical strategy as well as a gamble.

5. Limited options in central defence and midfield for the next games

With a double injury blow last night Arteta’s options at centre-back and midfield will be limited.

At the moment only Mustafi and Holding are fit to play against Brighton on Saturday as Mari and Sokratis both got injuries the latter sustaining it hours before the match while Luiz is suspended and Chambers is still sidelined.

The same concern is in the midfield with Xhaka joining Torreira in the injury room. Arsenal may have to field players out of their preferred positions in the upcoming games.

Misery for Arsenal continues as Brighton & Hove Albion defeat them

Manchester City 3-0 Arsenal: All you need to know