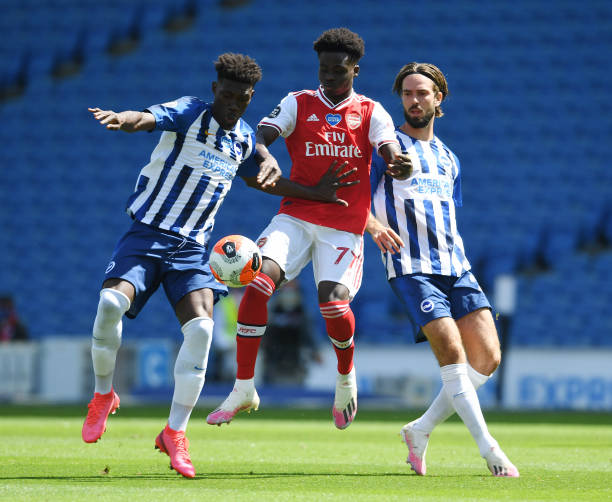 Arsenal faced Brighton & Hove Albion today hoping to get back into winning ways after they got thrashed by Manchester City on Wednesday but it was once again misery for the North Londoners as they have been beaten 2-1 by the Seagulls.

Arsenal head coach Mikel Arteta made a number of changes to the starting eleven that played against Manchester City and among the players that started this game was Nicolas Pepe and Alexandre Lacazette and the gunners got off to a good start as both Saka and Aubameyang came close to giving the North Londoners the lead. The home side seemed to be off the pace in the first fifteen minutes of the game but started to grow back into the game later on.

Arsenal were faced with a big blow after Bernd Leno went down in the first half after trying to catch the ball and this saw Arteta get forced to bring in Emiliano Martinez who immediately made a wonderful save to deny Brighton a few moments later. Both sides had chances in the first half but neither club managed to put the ball into the back of the net.

It was more of the same in the second half as both Arsenal and Brighton & Hove Albion were getting chances but their goalkeepers were at their best. The gunners found the breakthrough in the 68th minute as Nicolas Pepe curled in a brilliant finish into the back of the net giving Arsenal relief as they were under huge pressure.

Seven minutes later, The Seagulls went back into the game after Lewis Dunk flicked the ball into the back of the net after a congested scuffle in the Arsenal penalty box. Arteta then brought in Eddie Nketiah for Lacazette and also brought on Nelson, Tierney & Willock for Saka, Pepe and Ceballos with three minutes to go.

Arsenal were heartbroken in the last kicks of the game when Maupay put the home side infront after a great attackimg move and him being the player that injured Leno adding salt to the wound. The match ended 2-1 in favour of Brighton & Hove Albion and Arteta will not only need to assess a solution but also worry at a possible suspension for Guendouzi as he had a fight with Maupay after the final whistle.