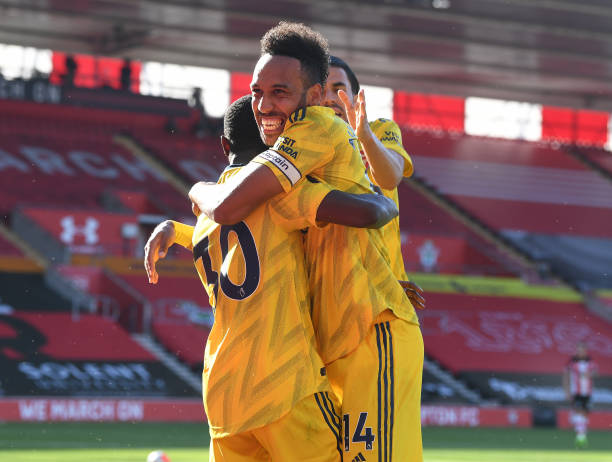 Arsenal have gone back to winning ways after two back to back games thanks to two goals from academy graduates Eddie Nketiah and Joe Willock .

Arsenal started the match well as they were very good in the attacking transitions and looked solid in defence thanks to the return of Granit Xhaka. The gunners thought that they had gone ahead in the first minutes of the game when Bukayo Saka sent a beautiful cross which Nketiah finished off but the flag had already gone up. Aubameyang also came close to opening the scoring for the gunners after Kieran Tierney sent a great long pass to him but his shot hit the bar.

Arsenal finally found the breakthrough in the 20th minute after Southampton goalkeeper McCarthy lost the ball on the edge of his penalty box and Eddie Nketiah put the ball into the back of an empty net. Arsenal then went on to have more chances but failed to convert them while the home side was also finding it hard to break down the gunners since they were very organized hence the first half ending in favour of the North Londoners.

The gunners came into the second half with a bit less energy as Southampton started trying to grow into the game but Arsenal was however very solid in defence and well focused in stopping all attacks that the home side was bringing. The gunners remained in their half for a long time and were opting for trying to attack via counter attacks, and Arteta later on brought in Joe Willock for Nicolas Pepe who has today been very poor as he was not receiving the ball due to Arsenal wanting to mostly attack on the left flank.

The gunners were once again struck with another injury in the 71th minute as Kieran Tierney and had to be replaced by Sead Kolasinac. Shane Long almost scored the equalising goal after a poor header from an Arsenal player saw him receive the ball in the penalty box but his shot hit the side net. Emiliano Martinez also made a good near post save in the next few minutes to keep Arsenal in the game. Arteta then later brought on Lacazette and Maitland-Niles for Ceballos and Nketiah.

Southampton defender Stephens got a red card for blocking Aubameyang’s path to goal hence giving a free kick chance to the gunners. Lacazette’s free kick got blocked and the rebound saved but Joe Willock put the ball into the back of the net to make it 2-0. The gunners had other chances but the game ended 2-0 in favour of Arsenal and Arteta will go home as a happy man.

Misery for Arsenal continues as Brighton & Hove Albion defeat them