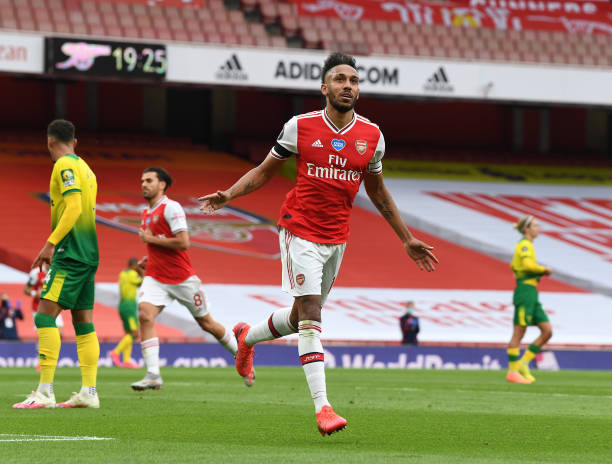 Arsenal have now won three games in a row after an emphatic 4-0 win over 20th placed Norwich City at the Emirates Stadium and this has seen them now go into the 7th on the Premier League table for now. This is a special day for Mikel Arteta and his men as this was their first game back at the Emirates Stadium after three consecutive away games and they didn’t disappoint their fans even though they weren’t in the stadium as they won by four goals to nil at home.

Arsenal bossed the game in the opening minutes but they however were only able to get their first goal of the day in the 33rd minute thanks to a mistake from Norwich goalkeeper Krul as Aubameyang snatched the ball away from him and put it into the back of the net. This was his 50th Premier League game and you could see how much it meant for him.

It didn’t take long for Arsenal to get their second of the day as Aubameyang made space for Granit Xhaka who was rushing into the penalty box and the Swiss international put the ball into the back of the net hence the North Londoners going into halftime with a 2-0 lead. Norwich didn’t offer too much of a threat in the first half and Arsenal were infront without too much worry since the opponents seemed to be unable to control the ball in the final third.

Norwich were however good in the second half as they had some pretty good chances but Arsenal goalkeeper Emiliano Martinez was however impressive as he made good saves. The gunners then however then later regained the full control of the game.

Norwich once again had another gift for Arsenal captain Aubameyang as a blind pass saw the Gabon international receive the ball in the penalty box and he made no mistake but put the ball into the back of the net to make it 4-0. Arsenal had one last surprise of the day after Cedric Soares who had just come on in the game scored a stunning goal in the last minutes of the game hence the game ending 4-0 in favour of the home side. Mikel Arteta will be happy that his side has now won three games in a row and he will hope that this form continues.