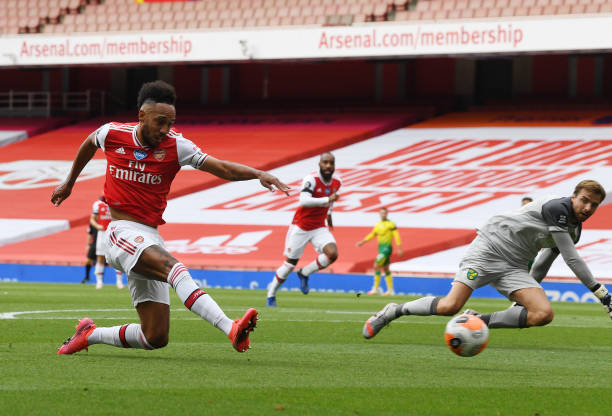 Arsenal striker and captain Pierre-Emerick Aubameyang has just less than one year remaining on his current contract at the Emirates Stadium and the club has for a while been trying to tie him down to a new deal for a while but he has now given fans hope as he has hint at staying after 4-0 win over Norwich City.

Aubameyang arrived at Arsenal in the 2018 winter transfer window and he has been such an outstanding signing as he has since then been the top scorer of the North Londoners but the club has however found itself in a tough position as he has entered into the last year of his contract at the Emirates Stadium.

The Arsenal fans will be hopeful that Aubameyang having talks with the club will be about him signing a new deal with the gunners as him committing his future to the North Londoners would be huge for the club and Mikel Arteta as he is someone who will always that brings goals to your team. Aubameyang has been linked with a move to clubs such as Barcelona, Real Madrid and Inter Milan but it is however unclear if they’ll indeed make a move for him with all the financial problems that the Coronavirus has brought.

A look At Five Of The Gunners’ Transfer Targets