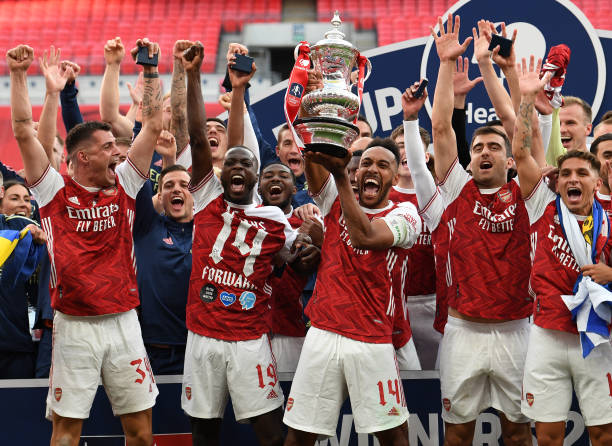 The 2019/20 season for Arsenal has come to an end after more than one year and every gooner will surely tell you that he’s glad that it’s been concluded as they have been managed by three different managers but it was however incredible how they managed to get silverware in this very campaign despite all the chaos. We take a look at how Arsenal performed in the four competitions that they were in last year.

The gunners were so poor in the league last season even though they had a good start but draws then later started destroying them as Unai Emery’s team was starting to show its fragility and inability to hold on to leads hence falling down the Premier League table when they were at one point just one point less than the league leaders at that moment. Unai Emery left the gunners in November with Arsenal in the eighth position and the Arsenal hierarchy’s decision to make Freddie Ljungberg as the head coach wasn’t successful as expected as they kept regressing hence then making the brave choice of appointing Mikel Arteta as the boss.

Mikel Arteta brought stability at the club but he however first struggled at first but then started picking up form and then the COVID-19 pandemic put an abrupt stop to the Premier League. The restart of the league saw Arsenal lose twice in a row but the gunners then went on to win eight of their next 11 matches in all competitions hence finishing in the 8th position on the Premier League table.

Arsenal were so impressive in the Emirates FA Cup last season as they mostly used their youthful stars in their first matches against Leeds United, Bournemouth and Portsmouth and they got the necessary wins. And more recently, Dani Ceballos sent them to the FA Cup semi finals with a last minute 2nd goal and Aubameyang then helped them beat both Manchester City and Chelsea to win the 139th’s edition of the FA Cup trophy.

LONDON, ENGLAND – AUGUST 01: The Arsenal players and staff celebrate after the FA Cup Final match between Arsenal and Chelsea at Wembley Stadium on August 01, 2020 in London, England. Football Stadiums around Europe remain empty due to the Coronavirus Pandemic as Government social distancing laws prohibit fans inside venues resulting in all fixtures being played behind closed doors. (Photo by Stuart MacFarlane/Arsenal FC via Getty Images)

It was a fitting end to the season for Mikel Arteta as it showed how he had many a lot of improvements with the squad he had at his disposal.

Arsenal were impressive in the UEFA Europa League group stage matches apart from the defeat to Eintracht Frankfurt at the Emirates Stadium but that is now being remembered well by the gooners as it led to the sacking of Unai Emery and the eventual hiring of Mikel Arteta. Freddie Ljungberg managed one UEFA Europa League game and it ended in a 2-2 draw and it was enough to get them qualification to the round of 32 where they got drawn with Olympiacos.

Arsenal defeated Olympiacos away from home under Mikel Arteta and the gunners were hoping to finish the job at the Emirates Stadium but they however stunned by the Greek side as it scored first, and took them to them to the extra time. Aubameyang scored the equaliser but Olympiacos then broke their hearts in the last minute of the game by scoring a second to eliminate them from Europe.

Arsenal won their third round game against Nottingham Forest and were then later drawed with Liverpool Witt the game to take place at Anfield Stadium. Arsenal’s match against Liverpool was very thrilling as both clubs scored five goals each with one of them having been a stunner by Joe Willock.

The game did not have extra time and so they went straight to penalties and the gunners got knocked out due to Ceballos’ penalty getting saved.

What Willian’s arrival would mean for Saka, Martinelli and Lacazette

Report: What Arsenal now needs to do to qualify for Europe after Man City ban gets overturned