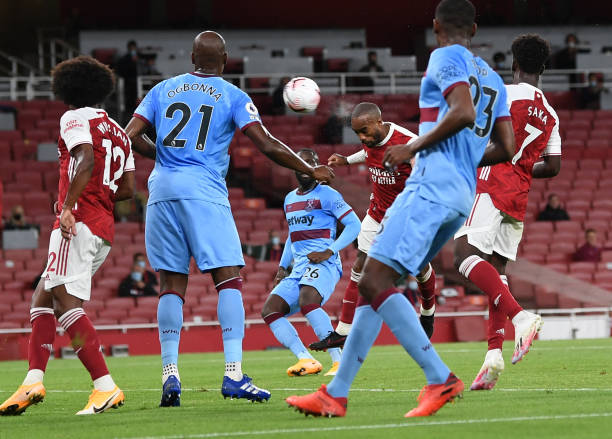 Arsenal have beaten West Ham United 2-1 thanks to goals from Alexandre Lacazette and Eddie Nketiah and this sees them have back to back wins in their first two league games as last season. This was such a very exhausting game for the gunners and Mikel Arteta will be glad that they got the three important points.

Arsenal started poorly in the first half as they seemed to be nervous in their passing and failed to create any notable chances while West Ham United sat at the back and tried counter attacks which were very threatening to the gunners. The gunners finally got their rhythm later on in the first half and started keeping the ball for much longer but they were however still unable to break down the defence of the Hammers as they looked organised at the back.

Arsenal finally got their first goal after Bukayo Saka put Aubameyang through and the Gabon international crossed to Alexandre Lacazette who headed home the first goal of the game to make it 1-0 to the home side. This was a very big confidence booster as they now started attackimg more fluidly than they were in the first minutes. West Ham United were disappointed in themselves for conceding since they had earlier contained the gunners but they however started searching for an equaliser, and even appealed for a penalty for a supposed Gabriel handball but the referee didn’t award it.

West Ham United finally got their equaliser through Antonio who finished off a good cross after an incredible counter attacking move by the visitors. The first half ended 1-1 and the gunners had to fight to get the three points in the second half.

The second half saw both sides have spells of dominance with the first few minutes of the 45 minutes seeing Arsenal dominate possession for a long time but still failing to create clear cut chances as West Ham United seemed to be very good at the back. Fabiaski barely had much to do as most of Arsenal’s chances ended with them losing the ball before trying to shoot at goal.

West Ham United on the other hand were very close to scoring a second many times as a shot by Antonio got saved by Leno and they then also had a header hit the bar. Arteta replaced Willian with Pepe with more than 15 minutes to go and Nketiah also came in later for goal scorer Alexandre Lacazette.

A fantastic Arsenal move saw Dani Ceballos enter into the West Ham United penalty box and he passed to Eddie Nketiah who gave the gunners their second of the day. This ended up being the last goal of the match and even though this was a tough game, they will however be happy that they got the main important thing being the points.

Liverpool 3-1 Arsenal: Talking points and what we learnt as Arsenal lost their first game of the season