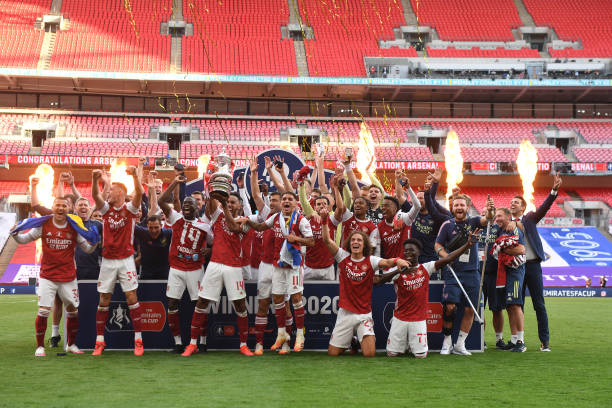 This season will be Mikel Arteta’s first full season in charge of the club, the Spanish boss led Arsenal to an FA cup title back in August just 8 months after being hired.

Arsenal will be involved in four different competitions and here is how they should realistically perform in the best way.

The Premier League is the primary competition for Arsenal and should be their major focus. The Gunners finished 8th last season, their worst position in over 24 years.

This season Arsenal’s aim should be to finish in the top four (at least 4th) and return to the Champions League after missing out on Europe’s elite competition for a fourth consecutive season.

Arsenal qualified for Europe’s second tier competition when they beat Chelsea in the FA cup final. Last season Arsenal suffered a shock exit in the round of 32 stage at the hands of Olympiacos.

Arsenal have come up short in this competition losing to Chelsea in last year’s final and losing to Atletico Madrid in their debut season.

Arsenal must take the Europa League very seriously and should aim to win it as it not only come’s as silverware but also a route to the Champions League.

One of the two domestic cup competitions in England, Arsenal have not won this competition since 1987 and it is sort of a bogey competition for them.

Traditionally Arsenal field fringe players or youngsters in this competition and should continue to do so.

The FA cup begins with the new year in January and Arsenal will be looking to defend it after they won it for a record 14th time.

In the early stages of the competition they should field youth and fringe players and if progress is made, winning the FA cup again wouldn’t be bad.

In summary a top four finish and Europa League victory should be Arsenal’s objectives for this season.

Report: Arsenal’s four summer signings and overview on what fans can expect from them

What Willian’s arrival would mean for Saka, Martinelli and Lacazette