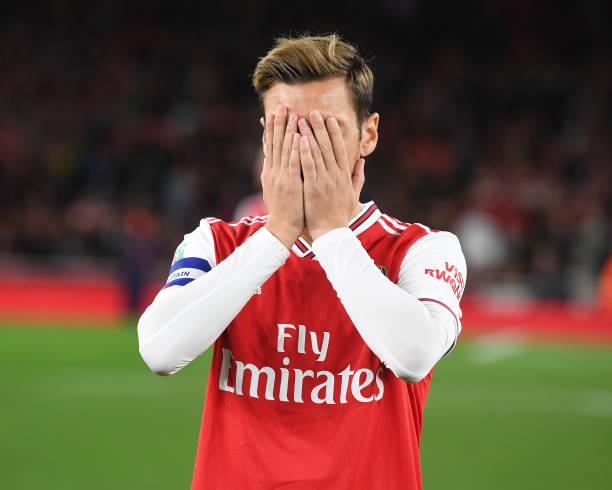 It looks as though Mesut Ozil has already played his last game in an Arsenal shirt as he was left out yet again yesterday.

Ozil hasn’t featured in a competitive game for Arsenal since the 1-0 over West Ham back in March but some Arsenal fans expected him to at least be named on the bench for a Carabao cup tie.

It is no secret that Arsenal want to get rid of Ozil who still earns £350,000-a-week. He looked to have gotten a lifeline under Mikel Arteta after being frozen out of the team under Unai Emery, but it’s the old story again.

Mesut Ozil appears to be defiant, insisting he is going nowhere until his contract expires.

“My position is clear, I’m here through to the last day of our agreement and I’ll give everything I have for this club.

“I’ll decide when I go, not other people. “I didn’t sign for two or three years, I signed for four and that should be respected by everyone”, spoke a defiant Ozil last month.

The former German international was the only player in the squad that refused a 12.5 per cent pay cut as a result of the COVID-19 crisis, which made his situation worse.

A lot happens behind the scenes, the Arsenal board are trying to force Ozil out and free the wage bill of his extravagant salary.

Arsenal have also distanced themselves away from Ozil’s political involvement. He criticised Arsenal for their failure to support him in his comments against China’s treatment of the Muslim Uighur population.

The club of course never want to be involved in politics especially given their reputation and business within China.

Mikel Arteta after the 2-0 Carabao cup win over Leicester said it would be very difficult for Ozil to get back into the and stated that he selects players who are in the “best condition”.

Getting to the bottom line, there’s a possibility Mesut Ozil will stay at Arsenal and not play a single minute of football this season or Arsenal terminate his contract or maybe Ozil gives up and decides he needs to play actual football and decides to quit.

Arsenal face a tough test in their next six matches