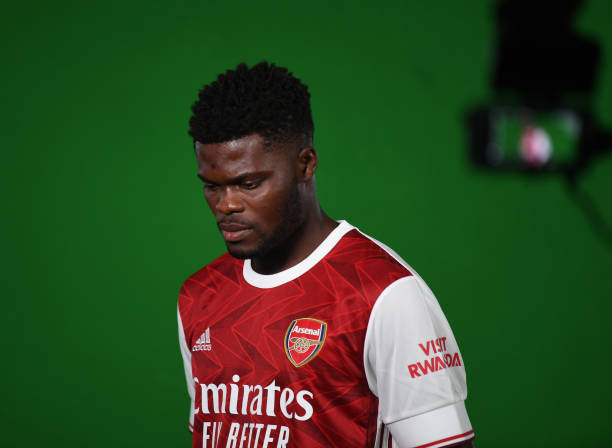 Arsenal completed the signing of Thomas Partey on deadline day of the summer transfer window and he has so far played a few games and the fans will be looking forward to seeing him in their encounter with Manchester United as it has come at a time when he seems to have begun settling at the North London club. Partey has now also opened up about how the gunners will beat Manchester United this Sunday.

Arsenal will this weekend go head to head with Manchester United at the Old Trafford with the hope of getting a win that would take them back to the Premier League top four since their last two consecutive defeats in the league have seen them descend down the table.

Thomas Partey has only been at Arsenal for a few weeks now but he has been open in saying that it is a dream for him to finally be at the Emirates Stadium and has in a recent interview claimed that he was disappointed in their loss to Leicester City but also commented on what they have to do to get the three points over Manchester United.

“Manchester United are a great team with great players and important players. If we do our work well, if we go in and fight for points, if we put a lot of pressure on them, we’ll be able to win.” Thomas Partey told Arsenal Player.

Partey was heavily linked with a move to Arsenal in the summer transfer window and there was a lot of uncertainty on if the Ghanaian international would still come to the Emirates Stadium but he finally did on deadline day and he has revealed that he is happy to be in a team that has everything.

“I think I’m in the team that I’m looking forward to playing for. They have everything, a good manager, good players, the right mentality and the way they play is very good. It’s the best place for me.” said Partey.