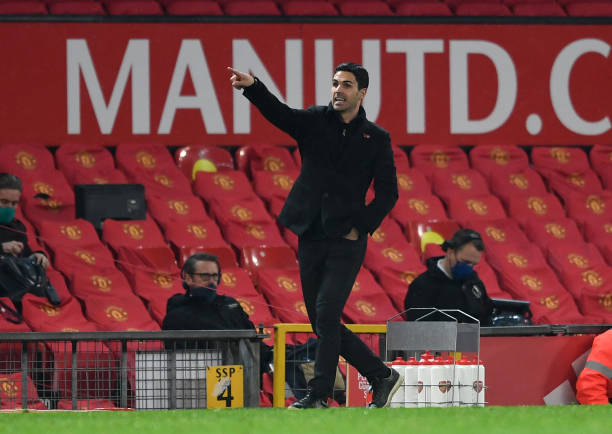 Arsenal was on Sunday welcomed to the Old Trafford ahead of their encounter with Manchester United and Mikel Arteta’s men put on a fantastic performance that saw them get all the three points to get closer to the Premier League top four. Mikel Arteta has revealed the key factor that he believes helped Arsenal win the game against Manchester United.

Arsenal came into the match against Manchester United after having lost their last two league games against Manchester City and Leicester City while the home side seemed to have turned a corner after topping their UEFA Champions League group thanks to two wins over Paris Saint Germain and RB Leipzig. Most supporters and pundits believed that this was going to be another game where Arsenal fails to win against a big six side away from home but they were completely wrong.

Arsenal manager Mikel Arteta selected a non expected starting eleven as it came with some surprises like the abrupt return of Rob Holding and the midfield pairing of Thomas Partey and Mohamed Elneny. Arteta faced the media after the win and was asked what key factor helped them get all the three points and he mentioned belief as per Arsenal Media.

“First of all, the belief that we created before the game. We wanted to come here and be who we are and be that from the first minute.” said Arsenal’s boss Arteta.

“I think obviously if you look at the performance, every player needed to be at their best and they were. They asked a lot of questions with the way we played, so I’m really, really happy with the performance.”

Arsenal supporters are delighted with Mikel Arteta as he has delivered to them not only an away win vs a big six side since 2015 but also put an end to their poor run of league games at Old Trafford as the last time that they had walked away with a win there was in 2006.

Aubameyang reveals how Arsenal defeated Manchester United away from home