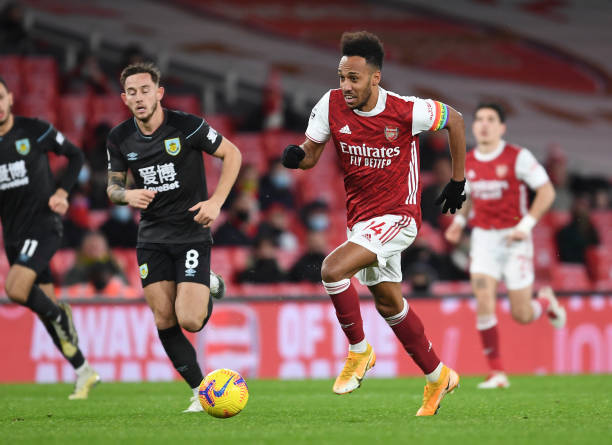 Arsenal welcomed Burnley to the Emirates Stadium on Sunday with the hope of getting a win that would give them the momentum to turn around their campaign but they were however stunned by the visitors as they lost 1-0 due to an own goal from none other than Pierre-Emerick Aubameyang. This loss has now put more pressure on Arteta as the gunners have now lost three games in a row in the league.

Arsenal came into this game with the same starting eleven that played in the North London Derby with the only exception being Mohamed Elneny coming in for Thomas Partey and they didn’t put out too much of a threat in the first half apart from chances like the save on Alexandre Lacazette after a fantastic move. The gunners seemed tamed in attack throughout the half despite having most of the possession.

Burnley also were unable to create clear-cut chances in the first half as well as the gunners had forced them to try to create from the middle by not giving any room to their attackers get on the flanks. Both teams were clearly frustrated in the first half and tried to fix their game plans in the second half.

Arsenal were very exciting in the first few minutes of the second half as they constantly attacked The Clarets and forced some good saves from Nick Pope and you could see that the visitors were getting desperate as they were knew they were about to concede. Burnley tried to do a counter attack but Granit Xhaka brought down their player and they had a heated moment that saw the Swiss international put his arms around the neck hence getting sent off.

LONDON, ENGLAND – DECEMBER 13: Granit Xhaka of Arsenal is shown the red card by referee Graham Scott during the Premier League match between Arsenal and Burnley at Emirates Stadium on December 13, 2020 in London, England. (Photo by David Price/Arsenal FC via Getty Images)

This was a very big blow for Mikel Arteta and his men as they had got reduced to ten men in a silly way and Burnley of course benefited from this as they now became very confident in their attacks. Lacazette was subbed off for Ceballos for midfield stability. Burnley finally got their goal after a free kick got converted in by Arsenal captain Pierre-Emerick Aubameyang to give the visitors the lead, and eventually all the three points.

Arsenal manager Mikel Arteta will now have to sit with his squad and see how he can put the season back on track as they have now lost their last three league games and his job could be at risk.