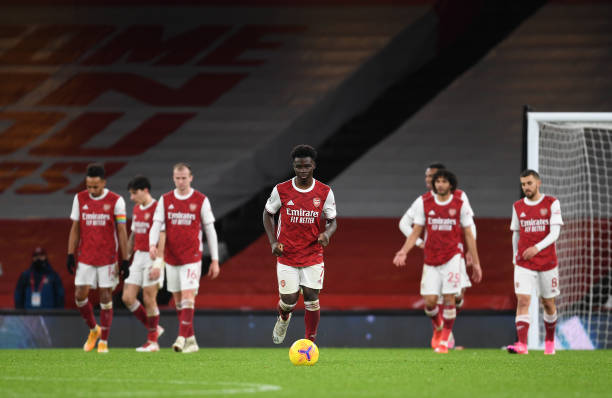 Arsenal’s 2020/21 Premier League campaign could have hardly gotten off to a worse kick off as Mikel Arteta’s men sit as low as 13th after the opening 16 rounds. They are way closer to the rock bottom of the league ladder than they are to European positions. With 16 games behind us, we take a look at the team’s chances of turning the fortunes around and initiating a climb up the standings in the near future. If it does not happen, the fans could legitimately even start thinking of a potential drop to the Championship football next term.

A dreadful beginning to the season

Arsenal have won no more than 6 of the opening 16 outings in the league, losing as many as 8 in the process, as reported by Bettingtips4you.com. While a somewhat tougher schedule takes part of the blame, the Gunners should have definitely achieved more given the squad Mikel Arteta has at his disposal. Arsenal are particularly struggling for creativity in the final third. They have scored no more than 16 goals in the opening 16 matches. They do not have a single player with more than five goals to his name so far. Alexandre Lacazette is the team’s top scorer. Interestingly, no midfielder has scored a goal (we don’t count Nicolas Pepe as a midfielder) before Granit Xhaka did by netting the 15th round free-kick goal in a 3-1 victory against Chelsea.

LONDON, ENGLAND – DECEMBER 13: Arsenal manager Mike Arteta during the Premier League match between Arsenal and Burnley at Emirates Stadium on December 13, 2020 in London, England. A limited number of spectators (2000) are welcomed back to stadiums to watch elite football across England. This was following easing of restrictions on spectators in tiers one and two areas only. (Photo by Stuart MacFarlane/Arsenal FC via Getty Images)

We can blame it on misfortune as the Gunners were just shy of happy days on several occasions. One such happened in the home fixture against Burnley. Arsenal have dominated the pitch throughout the whole course of the game but were just unlucky to convert in front of Pope’s goal. Eventually, Granit Xhaka was sent off after receiving two quick yellow cards and the Clarets capitalized on it from set piece to take three points from the Emirates. We’ve witnessed several more of such unlucky moments in Arsenal’s campaigns, but it’s far from being enough of a justification for a horrendous season.

Can the home win over city rivals Chelsea represent a breakthrough?

Before the clash with Chelsea, one of the title contenders (at least before the season began), the Gunners had been winless in as many as seven successive Premier League affairs. They took just one point from four matches against the likes of Tottenham, Burnley, Southampton, and Everton along the way.

Nothing suggested a better scenario against the Blues. Arteta mixed up his line-up by giving an opportunity to the likes of Mohamed Elneny, Emile Smith-Rowe, and Gabriel Martinelli to feature in the starting XI. Pepe, Aubameyang, Nketiah, and Ceballos were all benched, while David Luiz, Willian, Gabriel, and Thomas Partey were sidelined through injuries.

However, just when everyone expected the Gunners to continue sinking, the youngsters came up with a phenomenal performance. They all contributed to the shocking 3-1 victory, the one that will no doubts represent a massive confidence-booster to this group of players.

Looking at the schedule, they may just have a great opportunity to back up the mentioned victory as they are about to play the likes of, West Brom Albion, Crystal Palace, Newcastle, and Southampton by the end of January 2021. A potential run of five wins could completely change the course of the whole season and make the Gunners genuine candidates even for the top-four battle. At least, it is what we are all hoping for. In case of another bad streak, we should not be shocked to see Arteta leaving the Emirates much before we all expected.

This statistic revealed shows how unlucky Arsenal have been this season

Report: What will need to happen for Arsenal to sack Mikel Arteta