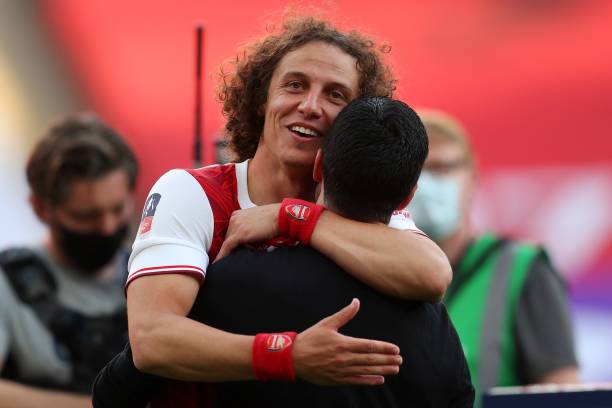 David Luiz joined Arsenal in the 2019 summer transfer window from Chelsea on an £8million deal after the West Londoners decided to let him go after he clashed with Frank Lampard. Luiz has generally been a controversial player in his time at Arsenal as he has sometimes had slumps in form and other consistent run of good performances. Mikel Arteta has many times praised the Brazilian centre back and he has been consistently in his starting elevens.

David Luiz joined Arsenal on a one year deal in 2019’s summer transfer window and the gunners decided to extend it for one more year at the end of last season because Mikel Arteta was so impressed with his performances and his leadership skills. Luiz’s contract at Arsenal will expire in a few months from now and The Independent has now reported that the gunners will extend his deal for one more year because Mikel Arteta is happy with the influence that he has had on his current crop of youngsters.

The decision to extend David Luiz’s contract will definitely split the Arsenal fan base as some can’t stomach the errors that he usually does despite the guidance and support he gives the youngsters. Most young Arsenal youngsters have all talked about the influence he has had on them and so it does not come as a surprise that it would be one of the reasons that his stay at the North London club is extended.

Arsenal embarked on a major clear out of their old or non needed squad players in the January transfer window and there was reports that Luiz could consider going to Portugal in July and so it’s not known if he would accept the new deal extension from the gunners.

Five players that could be sold in the summer transfer window