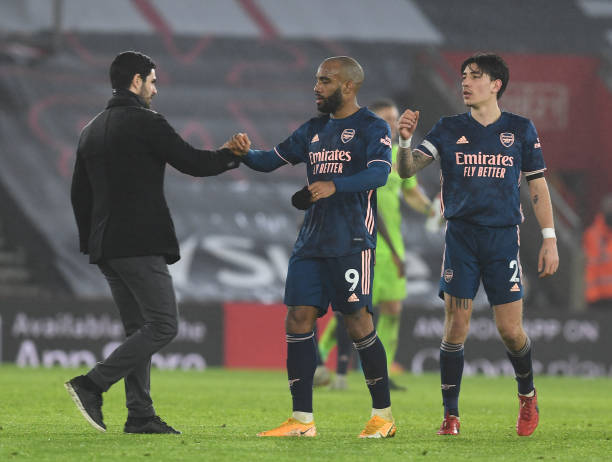 ( Lacazette and Arteta / Photo via Getty )

Arsenal striker Alexandre Lacazette has been at the Emirates Stadium since 2017 after arriving on a whooping €53million deal from Lyon and he has not turned out to be a great investment despite the occasional fantastic run of games. Lacazette has been linked with a 2021 summer transfer exit from Arsenal in the last few months and Arteta has spoken out on whether the Frenchman will leave.

Alexandre Lacazette arrived at Arsenal in 2017 at a time that the club believed that they would no longer rely on Olivier Giroud but the Frenchman had a rough start to life as a gunner as the North Londoners then six months later went on to sign Pierre-Emerick Aubameyang who delivered superior numbers than him in the next few seasons together. Lacazette has been linked with an exit from Arsenal in the last few transfer windows and his current contract at the club will expire next year in June.

Arsenal boss Mikel Arteta has shown a lot of support to Lacazette during this season as he has not only started him over Aubameyang some times but has also been continually praising him for the impact he has on the pitch even when he is not the one scoring goals. Mikel Arteta was recently asked if Lacazette will leave this summer and he claimed that he is happy with him, and also delivered the good news saying that he believes new contract talks should start soon.

“He’s got a contract with us. He played really well the other week. It’s exactly what we demand him to do. I’m really happy with him and the discussions about his contract will happen soon and we will see what happens.” Mikel Arteta told Arsenal Media.