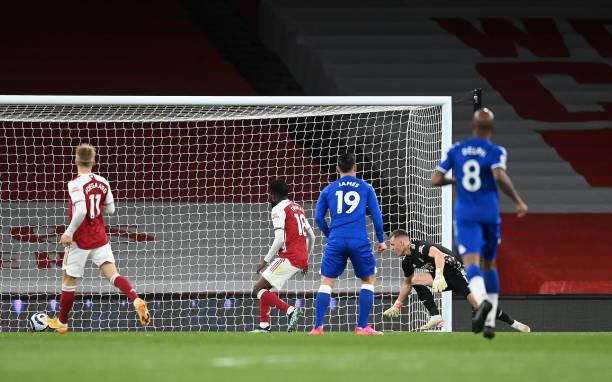 ( Arsenal Vs Everton / Photo via Getty )

Arsenal hosted Everton at the Emirates Stadium yesterday night and their poor home form continued as they were beaten one nil by The Toffees thanks to a mistake from Bernd Leno. Arsenal boss Mikel Arteta has spoken out on the mistake made by his first choice goalkeeper Bernd Leno.

Arsenal goalkeeper Bernd Leno was given a rest last weekend when the gunners faced Fulham and Mikel Arteta brought him back into the starting eleven for the game against Everton since it was tougher opposition, and with also the thought to keep him active ahead of their important game against Villarreal on Thursday.

Bernd Leno started off the game against Everton pretty well as he made some nice saves in the first half to keep the score at 0-0 but his day got ruined in the second half after an attempted low power cross from Richarlison found its way past him to give the visitors the lead.

Bernd Leno has received a lot of criticism from the Arsenal supporters due to this mistake and Mikel Arteta in his post-match press conference was supportive of him as he claimed that the German international is his first choice goalkeeper and that mistakes are part of football.

“We have two really good goalkeepers and Mat got a chance because he deserved it. Bernd is our no.1 goalkeeper, he’s been doing well and errors are part of football.” Mikel Arteta told Football.London.

It will be interesting to see if Mikel Arteta will drop Bernd Leno in their upcoming UEFA Europa League game as Maty Ryan is yet to put a foot wrong since he arrived at the Emirates Stadium in January.

How Arsenal could lineup without Lacazette and Aubameyang against Villarreal