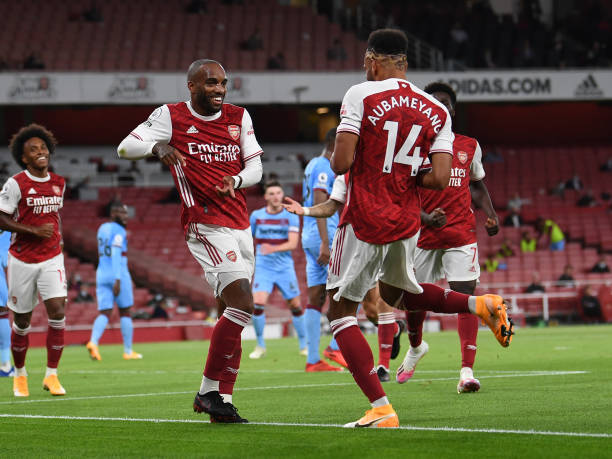 Arsenal will on Thursday face Villarreal in the UEFA Europa League semi finals and they will come into this game after their recent disappointing results in the Premier League. Arsenal will come into this match with some members of their squad injured and there’s a chance of them playing without Alexandre Lacazette and Pierre-Emerick Aubameyang who are their two main strikers.

So we are going to take a look at how Mikel Arteta could set up his team to play against Villarreal without their two star strikers who have scored goals for them in the last three seasons.

ARSENAL’S STARTING LINEUP TO FACE VILLARREAL WITHOUT LACAZETTE AND AUBAMEYANG

The absence of Alexandre Lacazette and Pierre-Emerick Aubameyang will not have any effect on the defence that Mikel Arteta ends up using and, so that backline used in the above lineup is the one we expect the Arsenal boss to use. The absence of the striking duo could however affect the midfield and so Arteta will have a lot of headache on choosing the best central and attacking midfield for this game and we predict that the gunners could bench Emile Smith Rowe for Martin Odegaard since they will need the Norwegian feeding balls to the wingers, Pepe and Saka to cross for the striker.

Arsenal’s young striker Eddie Nketiah scored a late equaliser against Fulham last weekend and he was given a chance against Everton but he was however toothless hence this being the perfect chance to try Gabriel Martinelli in the striking role if both Lacazette and Aubameyang are unavailable.

Aubameyang sends messages to Arsenal supporters ahead of the Villarreal game