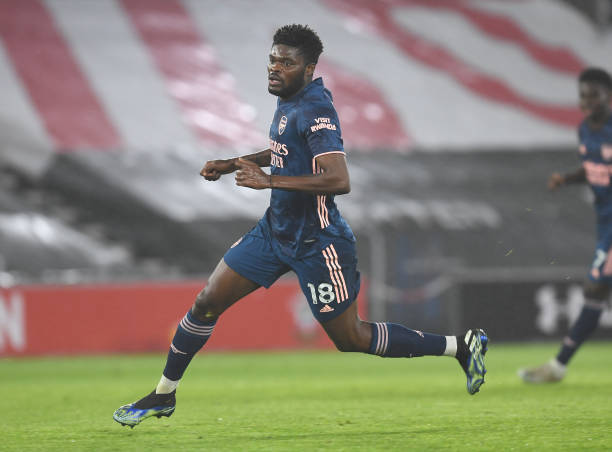 Thomas Partey was substituted after 75 minutes against Burnley on Saturday with the midfielder asking to come off. It was his first start since recovering from an ankle injury he sustained in pre-season.

Luckily it doesn’t seem to be a serious problem [muscle cramps] but Partey’s injury record at Arsenal is really worrying.

Partey has had 5 different injuries since he joined from Atletico Madrid in October last year. These injuries have kept him out of action for 106 days, missing 21 games in the process. He has only managed to complete the full 90 minutes in 13 games.

The Ghanaian international’s injury record at Arsenal is shocking considering that he had a clean record while playing in Spain. Partey had incredibly missed just 6 games and 29 days due to injuries throughout his entire career.

Thomas Partey while at Atletico Madrid

This was despite playing over 200 games in Spain and for his national team. Partey established himself as one of European football’s most dominant central midfielders during his time at Atletico.

It is a mystery how one of the most athletic footballers who played for a physically demanding manager has struggled with fitness.

The belief was with a pre-season and time to settle down, he would hit the ground running in his second season. Unfortunately he already picked up an injury that made him miss four games this season and couldn’t play 90 minutes in his start of the season.

With the way things are I liken Partey to Abou Diaby. Diaby was a talented box-to-box midfielder, he picked up 37 different injuries which literally killed his career.

I hope Partey’s fitness improves and he remains injury free for the season, a fully fit Partey is crucial for the teams ascendance.

Opinion: Selling Granit Xhaka for anything less than £30m is stupid