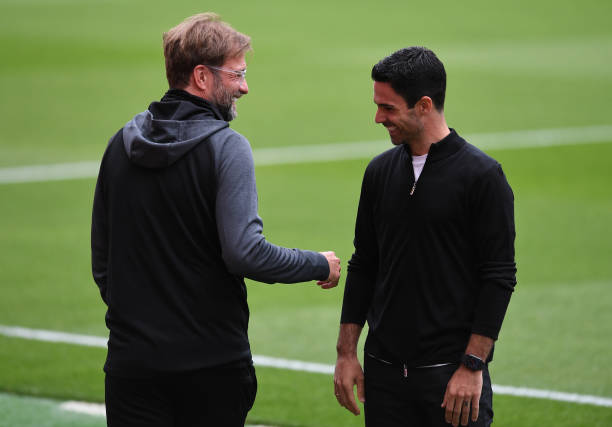 Arsenal’s unbeaten run of ten games across all competitions will face its biggest test yet on Saturday when they travel to Merseyside to take on Liverpool.

Just before the international break, the Gunners had a 1-0 win over Watford and narrowed the gap between themselves and the top four.

Granit Xhaka [knee] and Sead Kolasinac [ankle] are ruled out of Saturday’s game. Arsenal are set to be boosted by the availability of Thomas Partey and Pierre-Emerick Aubameyang.

The duo will be assessed ahead of the game alongside Folarin Balogun [cramps].

Arsenal’s last win at Anfield in the Premier League was a 2-0 win in September 2012. Liverpool have won their last five home Premier League matches against Arsenal, netting at least three goals in every win.

Arsenal are now on the longest unbeaten run of any side in the Premier League (8 – W6 D2). The Gunners last had a longer run without defeat in the competition between August and December 2018 (14 games under Unai Emery).

Since Jurgen Klopp took charge of Liverpool, Arsenal have won just one of 11 Premier League games against the Reds (D3 L7), a 2-1 win at the Emirates in July 2020.