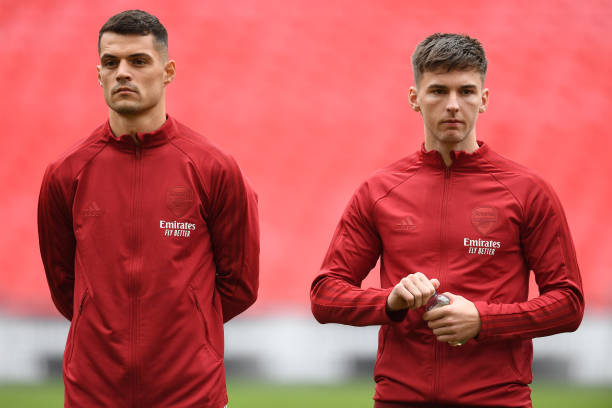 There was a confusing scene during Arsenal 2-1 over Brentford on Saturday when Alexandre Lacazette was taken off for Eddie Nketiah.

Lacazette handed the captain’s armband to his replacement Eddie Nketiah. Nketiah went over to give Xhaka the armband but the Switzerland international refused to take it twice.

Nketiah briefly wore the armband until he found Kieran Tierney, who took it off him for the final minutes of the match.

It was a strange scenario and puzzling because Xhaka is the supposed vice-captain or next in line after Lacazette.

After Aubameyang was stripped of the captaincy and eventually left, Lacazette was officially announced as the captain for the rest of the season and Xhaka is one of his deputies or the first in order.

Xhaka was previously Arsenal captain during Unai Emery’s tenure until he had a bust-up with the supporters and lost his role as captain. Since then he has worn the armband whenever Aubameyang or Lacazette weren’t on the pitch including the corresponding fixture against Brentford on the opening day of the season.

Xhaka lost his captaincy role after a bust up with the fans in 2019. (Photo by Stuart MacFarlane/Arsenal FC via Getty Images)

When asked why Xhaka turned down the armband, Arteta said: “Because it was for Kieran. Kieran was the next in line and that’s the reason why.”

Arteta’s response is a big hint as to who will be Arsenal’s long-term captain with Lacazette expected to leave at the end of the season.

Tierney has been touted as the ideal long-term captain for Arsenal although the likes of Martin Odegaard, Gabriel Magalhaes and Ben White have gotten shout-outs.