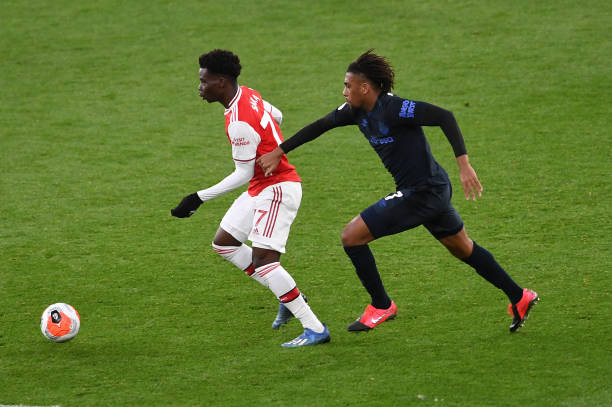 "( Arsenal Vs Everton / Photo via Getty )

Arsenal will this weekend play their final Premier League game of the season and they will hope that they end the campaign in the Premier League top four but that will be unlikely unless Norwich make a miracle in their game against Tottenham Hotspur. And so we take a look at Arsenal’s likely lineup to play against Everton.

Arsenal goalkeeper Aaron Ramsdale will be in goal this Sunday to complete his first season at the Emirates Stadium.

Ben White and Gabriel Magalhaes were in the squad that lost to Newcastle United and so they should be available for the game against Everton. So Arsenal’s back four will consist of Tavares, Gabriel, White and Tomiyasu.

Granit Xhaka and Mohamed Elneny were not good in their performance against Newcastle United but Mikel Arteta has no other choice as Lokonga is inexperienced and Partey is not likely to feature.

Gabriel Martinelli didn’t start the previous game but he will likely return in the starting eleven while Emile Smith Rowe will come in for Martin Odegaard and Saka will stay in his right wing position.

Arsenal striker Alexandre Lacazette will likely return to the starting lineup after having been benched for long.

Confirmed: Arsenal receive good news ahead of clash against Everton

Report: How Xhaka shows his different from all Arsenal players